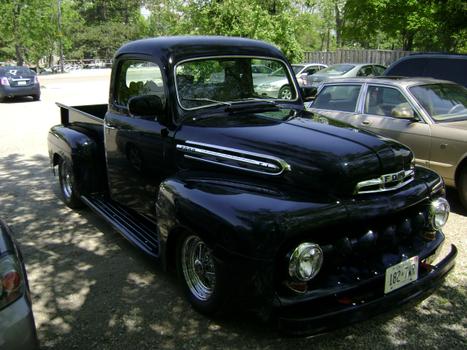 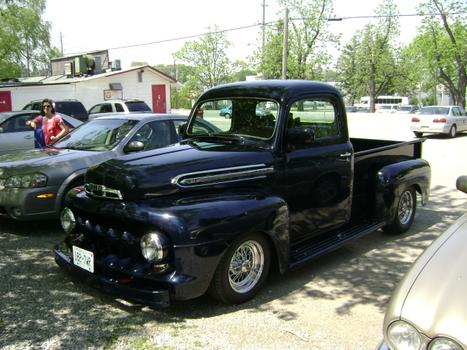 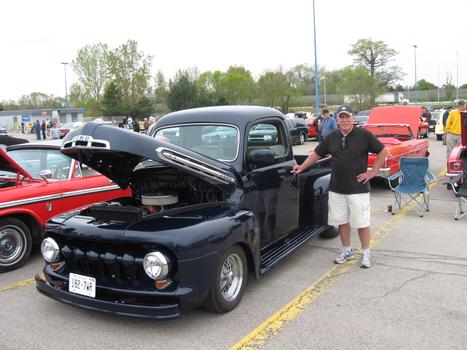 The grill has two extra teeth, the stainless steel side trim is custom mounted on the hood, side mirrors are from a Toyota Previa, and the rear fiberglass roll pan is a modified Ford Ranger unit.

The truck has PB, PS and PW. The interior has late Chrysler 300 leather seats, a late Dodge console with stainless cup inserts and a 12V VW two speed wiper system. The two Gauges are Dolphin 5" quads. The column is a modified late Trans-am with a leather wheel and a new custom stainless steel hub with a Ford logo.

The mill is a 302 with Mustang shorty headers feeding 2.5" stainless pipes and a 600 CFM Holley carb sits on a Performer manifold.

The power steering box is a Trans-am quick ratio unit. The Mustang AOD has a remote frame mounted finned oil cooler. A 7" brake booster is mounted under the floor and both fuel and brake lines are stainless steel.

Front and rear park lights are new stock units and headlights are halogen. The bed boards are red oak with a custom made opening for access to the rear mounted battery and stainless steel 17 gal fuel tank.

I get a lot of compliments on the 96 Ford Explorer blue/clearcoat paint which has been professionally polished out. 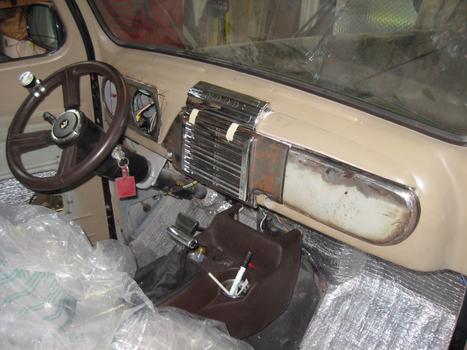 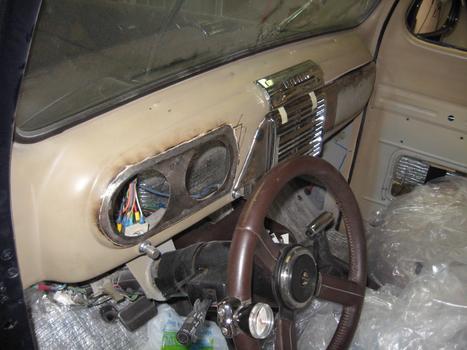 I recently had mods done to my dash by a custom car builder. I never liked the 51 dash because of the heavy chrome piece running across the top which was pieced into three sections at the dash, ash tray and glove box.

Originally Bronco gauges were tunneled into my dash so I had him remake the gauge holes to fit new 5" quad gauges. I had the glove box door sectioned and the top piece attached to the dash, so the top of the dash on both sides had the same curve, then the glove box door was reshaped to match a new metal panel made to cover up the speaker grill, and the ash tray areas. Then the chrome speaker grill and radio hole cover from a 48-50 pickup dash were mounted.

I am very happy with the quality of the work done. It looks a bit rough now but after a skim coat of bondo, new paint, and new gauges it will look fine. I could have left the dash uncluttered without the chrome and it would have also looked cool, but hey, I like shiny things. Mel

I’ve removed the bumper and finished the front roll pan. I added a rear roll pan, and Led lights all around. I Finished the dash, primed it, new gages, new switches and I’d like to see how many people will figure out how the dash has been modified. The two speed wipers are 67 VW 12V., The wiper arms are very close to the Ford system so I used pieces from both and they work perfect. The system only works with the VW switch.

What you don't see is the suspension change. The front had a 69:Nova clip and the rear leaf springs on the 9". It now has all new independent front tubular suspension with rear 4 links and coil over shocks all around. I have a set of Foose Legend wheels to go on soon. 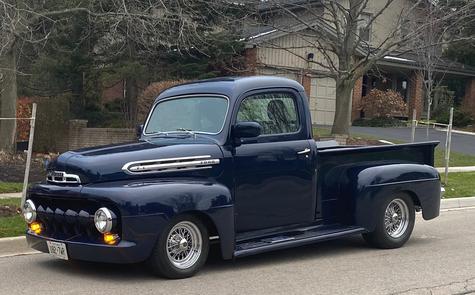 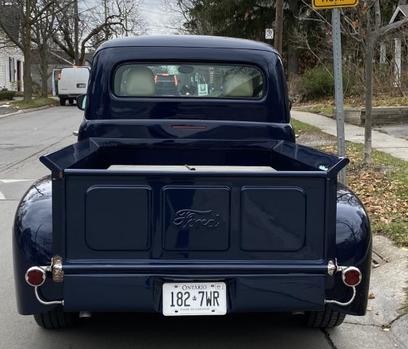 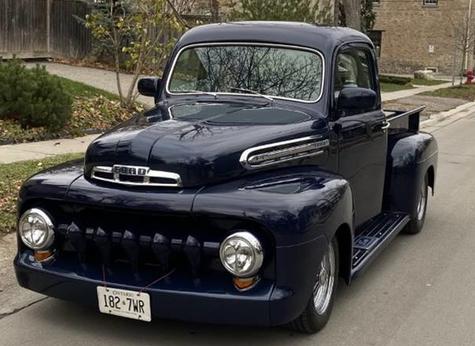 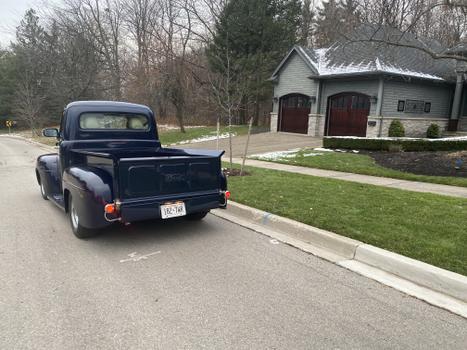 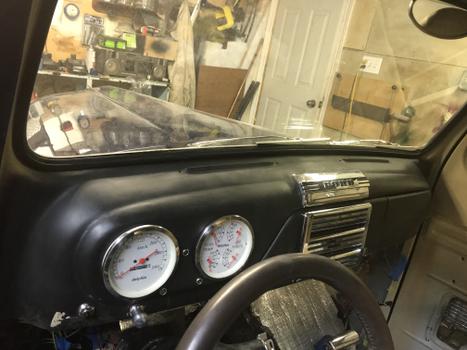 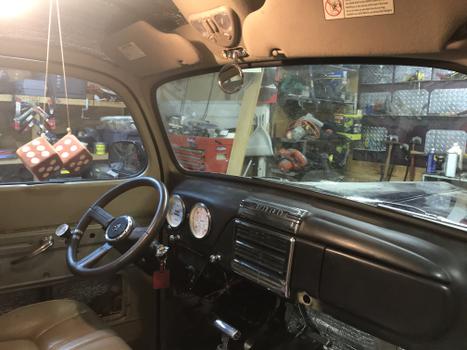 Nice F100, Mel. I'm intrigued by the two extra teeth in the grill...is that your original idea?

Thanks, I did the work over a ten year period. I did every thing but the running gear and paint and body mods. Mel

Cool, I actually drove a 48 Ford 3 ton dump stake occasionally hauling lumber when the real driver took a sick day. Big floor shifter and double clutching to shift. At 17 I loved it. Mel

Front suspension, are the coils stock for a small block eight without air ?? Would you make any recomendation for the coils ?

Yeah, I would do things a little different if I did it again. I have a 69 Nova clip with Discs. The guy who installed it made the truck too low for my liking so I installed new coils for a GM 350 with air (stiff) but the Ford 302 SB is 100 lbs lighter than the 350 so it raised the front a bit and it doesn't bottom out.But she rides rough.I think I should have gone to a spring shop and maybe they could have installed a set of springs that were a compromise. I would say put lots of thought into it and maybe get a professional to advise you. Mel

Very nice truck. I did a 51 Ford truck a few years ago, really enjoyed doing it. It had a 351 windsor motor and a c-6 trans. Ran good out on the road. Hope that you enjoy your's.

The part I liked best was building it. This summer I didn't get a chance to go near it. I was so busy with house projects, but next year I am adding original tailights and finishing the interior. You talk of your truck in the past tense, do you have another ride now? Thanks, Mel

Thanks., she is turning out the way I expected which is always a bonus. Next I’ll put a couple of old school 3” round stainless exhaust tips out the rear. Gotta start on door panels and a headliner too.

Love your car, nice lines. I’ll take a break for the winter and back to finishing what I started. Thanks for the compliment.

Love your car, nice lines. I’ll take a break for the winter and back to finishing what I started. Thanks for the compliment.

Mel, congratulations on all the fine work on your 51. I see you are a fellow Ontario resident. What part of Ontario. I am in Milton. Cheers.