Soon after I bought my first car. 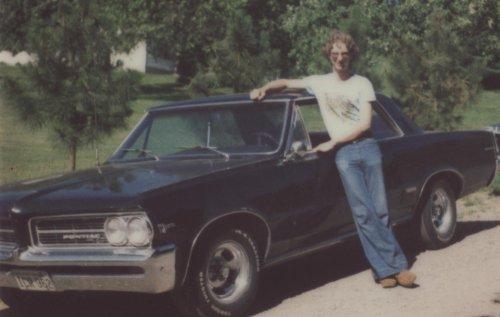 Looking better with new tires and rims. (Washing helped too!)

It's December of 1977. I'm 17, and my Dad is helping me look for a car to buy - my first car! After looking at some junkers, we come across this 64 LeMans. We look it over, and decide to take it for a test drive. Dad says it's in good mechanical condition. He steps on it and says "this has some power!" I'm sold! I offer the asking price of $250. I'm now a car owner!

My Dad had noticed that the heater core was bypassed because of a leak, so that was my first project. I pulled the heater core, took it to a radiator repair shop, and it was good as new.

Two months later I doubled my investment, spending $250 on new tires and wheels. Now she's looking sweet! In August of 1978 Jim Hall, a family friend, helps me pull the engine and I took it in to be rebuilt. Now it's running as good as it looks! It was only a 326, but it was pretty hot to me. I picked up a 4 barrel carb (a Carter AFB) and intake manifold at a junkyard. The carb is looking pretty rough so I rebuilt it. I installed it on the engine and it ran!

The morning of January 13, 1979 is cold and frosty. I'm driving to pick up my sister. The roads are very icy. I hit a patch of ice, but I easily corrected it without missing a beat. This only added to my hubris! After picking up my sister, we are heading to our Dad's house for a visit. The guy in front of me is driving like a granny. What a wimp. He obviously doesn't know how to drive, so I pass him. As I'm passing him by, my trans downshifts for me, breaking my tires loose, and I'm heading for the ditch! AWWWW!! After getting towed back home, I am bummed out. I take a nap. When I wake up, I look out the window, hoping it was just a dream. No such luck.

The front end damage was pretty bad. Fixing it would cost more than buying another car, so I bought a '67 LeMans (with a 4-speed), put my rebuilt engine in it, and parted-out the '64.

I didn't have any reason to report the accident to my insurance company (liability coverage only) and, ironically, a week later they sent me a Pemco Safe Driver sticker to put in my window!

I bought that 67 LeMans from you. I Love that car. It had some rust below the back window so I started working on that. I was going to paint it mid-night star fire blue. I moved to Nebraska and left it with a friend and never saw that car again. Brandon, I think I paid $500 for that car and it was my favorite car. Won a lot of races on the Boeing freeway. Sure wish I could find that car.

Boy that picture brings back memories. You cuzz Curt...