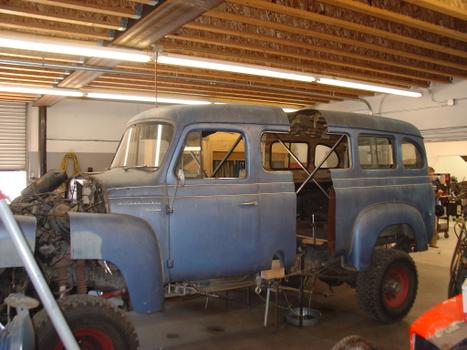 I guess you would call this a mixture of old and new school - Started with my 1996 Ram 2500 which was stacking up the miles and decided to marry it to a 1956 Travelall that I bought almost 20 years ago. Here's the start. A '56 Travelall on a '96 Dodge Ram chassis. We shortened the Dodge chassis 18" and added 20" to the body of the Travelall. 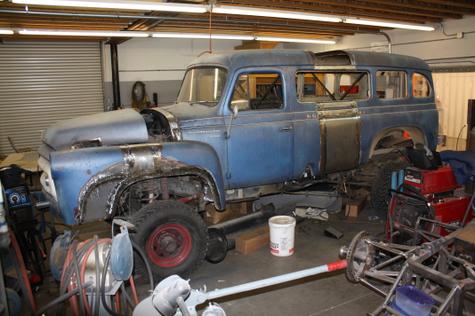 Here you can see what we added into the body. We also needed to add 9" into the front fenders to make the Cummins diesel fit! We used the original Dodge radiator as well. 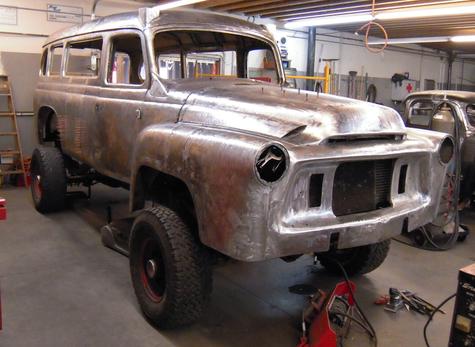 Here's a front quarter view. This was taken about a year ago. That hood needed to be stretched and all the angles changed. We also added side air scoops for cooling air. 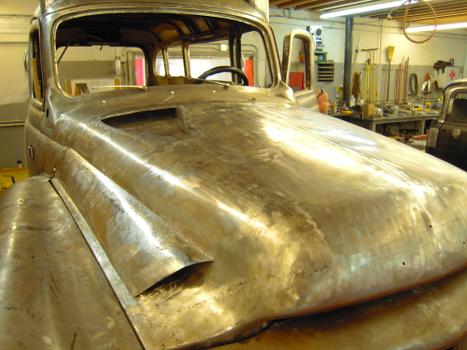 Here's the finished hood before primer. I cut in a NACA duct for intake air to feed the turbo. The top half of the cold air box is incorporated in the hood. The hood is now hinged at the front instead of the side like it was originally. Over 100 pieces of metal in the hood and too many man hours to count!! 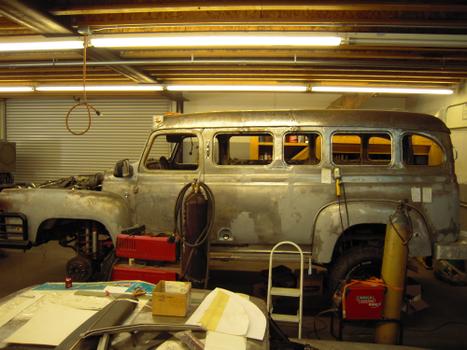 Recent side view. After stretching I fabricated a pair of side window posts and welded them into the stretched front window, so now it has five windows on each side instead of four. Most of the body work is done here as well. I figure another three to four months and she'll be on the streets of SoCal!! I'll ad more pics when there's a change in the status. 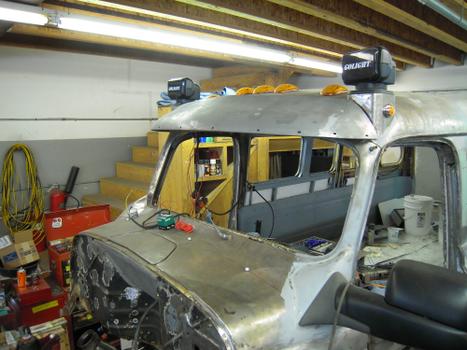 Found a visor off of a '52 Merc and thought it would finish things off in the windshield area. A little cutting and fitting and it almost looks like a stock piece!! 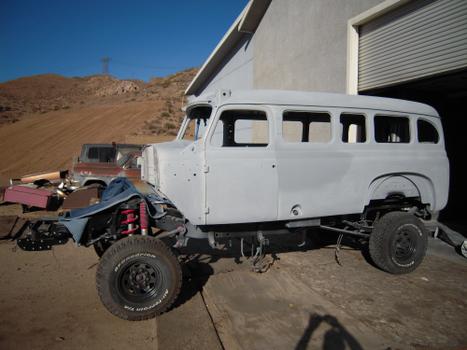 FINALLY!!! have the whole car primered and sanded with 320...should be painted by Christmas. 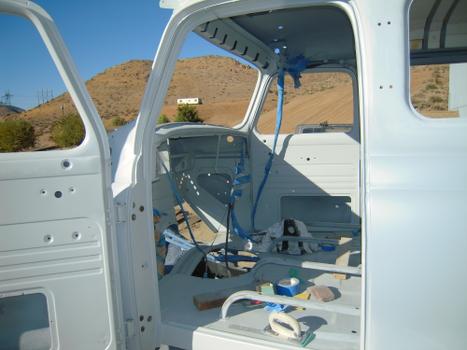 Doors are fitted and gapped. 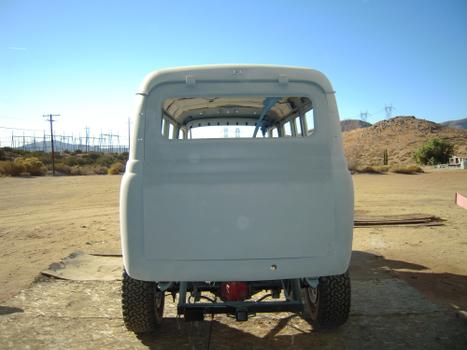 Rear view....Made a one piece fiberglass lift gate using the original two piece lift and tail gate as a pattern. 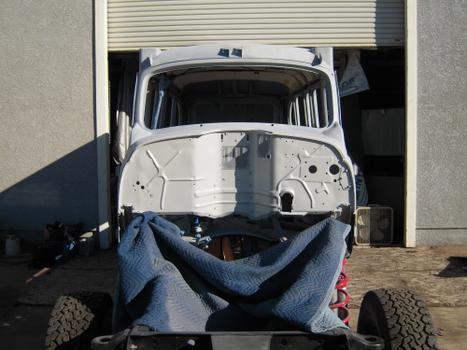 Sure looks narrow without the fenders. Next pics posted will have the fenders on. Firewall is already painted the correct shade of grey. 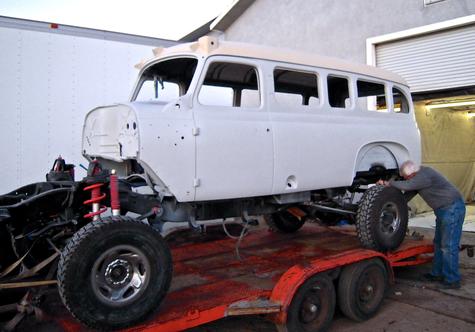 Well, we rented a booth yesterday and shot the color and the flat clear. Man, this thing has a lot of surface area!! Thought we would only be there about 5 hours but it was almost 8 hours total. Magnolia Ivory on the roof and Light Grey on the body with two coats of flat clear over. Now the assembly begins...... 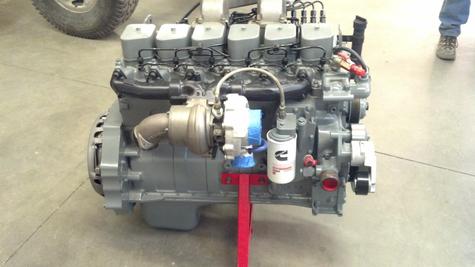 Got the engine back from Ultimate Truck Performance last Friday. Hamilton cam, pushrods, and valve springs. Garrett Stage II turbo. The builder says 600 hp will be no problem. 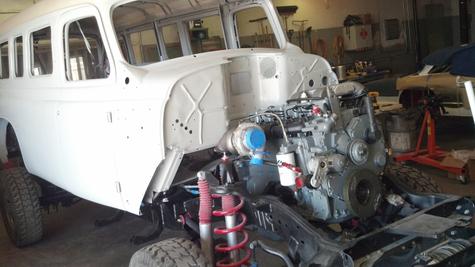 Got the motor in last night. Now the real assembly work starts. 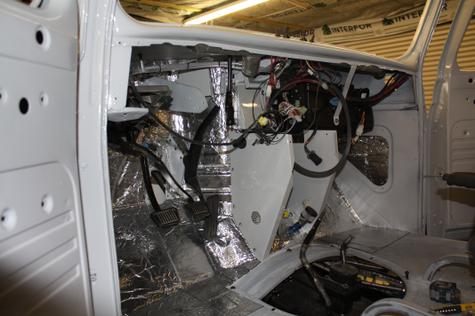 Finally putting in the sound deadening, along with the windshield washer hoses, defroster vents, and the sides of the center console. 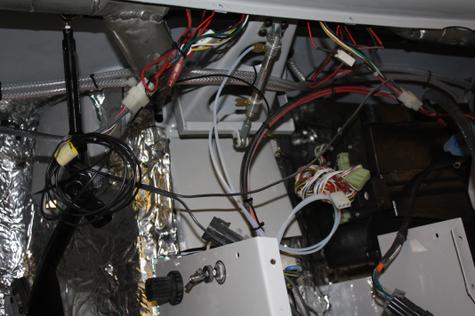 A little closer look at the center console area. The cowl vent is actuated by an air cylinder instead of the original lever. 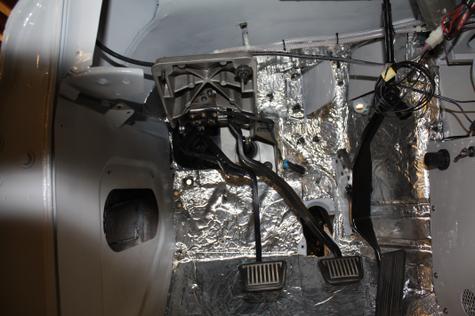 Pedal assembly was modified from the original Dodge Ram assy. We built a new receiver for the clutch master cylinder . 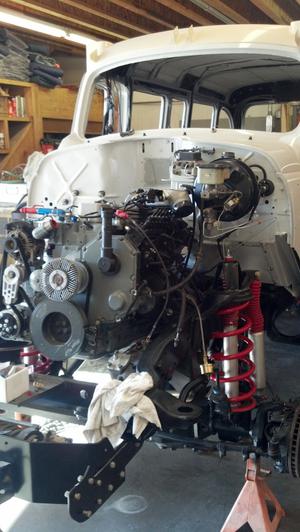 Thanks!! It's been fun so far, as well as a little frustrating at times.

I would never thought of doing something like that. Great job.Do keep us posted on the project.

Do you have any updates to post? These photos were 2 years ago.....

I'll be putting some more up soon. We got sidetracked building a road race car from a '62 Falcon. It was on track for the first time Friday 01/31/2014. Now that its running I'm back on this one. Thanks for asking. Mike

Been over a year since your last post. I'd really like to see how it's coming along.