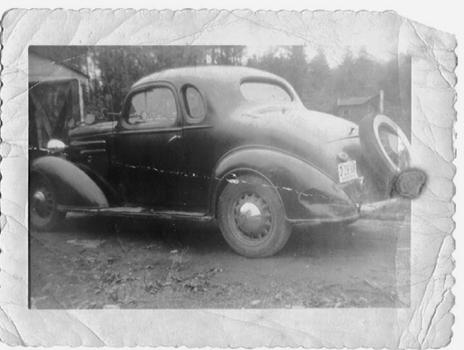 What kind of memories do you have of your first car: good, bad, indifferent? Would you like to have it back again? Was it a good car?

My first car was less than a piece of crap!

It was a '36 Chev coupe I found in a farmer's pasture (in 1951). I talked to the owner who told me that I could have it, if I got him a front axle so he could make a trailer. My neighbor gave me a '37 Nash front axle; alas, my first car became a reality. The car only had three tires, so I borrowed a wheel and tire from the farmer, so dad could tow me home. The wheel and tire I put on wouldn't turn, so when we got out to the road, there was one long, loud squeal of burning rubber. Sure got the attention of the farmer and his cows! I was fearing what the farmer was going to say about the new flat spot on the tire that he had loaned me. I brought the wheel and tire back the same day on my bicycle. To my surprise, he didn't say anything (luckily, he wasn't home).

Picture this...a car on a jack with only three wheels. It didn't run. The windshield was delaminated and clouded over like they used to get. Mom and dad made me park it behind the garage. Life was good. I HAD MY FIRST CAR!!!

My first job was to fix the wheel. I cleaned up the brake so the wheel would turn free. The next thing was to get a tire for the spare wheel. The wheel was 17". I had a 16" inner tube, but no problem, it should stretch out just fine. I got a discarded tire from a junk pile. It was a 16" tire, but like the tube, it was made of rubber, so it should stretch out just fine, too. At that age, I was persistent and bull-headed. I worked for two days trying to get that tire stretched out onto that wheel. I used soap, grease, pry bars, a sledge hammer--everything I could think of. NO LUCK.

That same junk pile had a 17" tire that at one time had blown out the sidewall. Well, I took the 16" tire and cut out a hunk of the side wall to make a boot. I glued it to the side of the blowout in the 17" tire using some of dad's tar. I can still remember the tar oozing out of the tear from the blowout, but it held air. At last, I could take the car off the jack. It was beautiful.

I showed dad what I had done, thinking he would approve. All he said was something about not ever taking that @#$$% car out with that tire!

Now that I had the car on four tires, I wanted to start the engine. I installed an old, discarded battery and hooked up an electric motor to the generator. It was cool to see the ampmeter showing a charge. My car was coming to life. As the battery began to charge, I checked the lights, horn, heater, etc. Things seemed to work. After the battery was charged, I poured a little fuel down the carburetor and tried it. Surprise! It started, but did it ever smoke--and I mean a lot. It looked like someone was pouring Bardahl down the carburetor, except it never cleared up.

Even though I knew little about what I was doing, things were looking promising. I took out the windshield so I could see, and started driving it around our pasture. I would get a gallon or two of gas now and then with my lunch money from school. The sacrifice was worth it. With my total income of lunch money (mom never knew), I finally replaced that blown tire with a bald one from a junk yard. Then I started saving for the biggy: an engine rebuild. I read the Sears & Roebuck and Montgomery Ward catalogs (We had an outhouse in those days which always had catalogs for reading and other things). Montgomery Ward had piston rings for $3.50 and gaskets for $4.00. I ordered the parts, hand-lapped the valves, and filed down the rod caps. The engine ran surprisingly well.

By this time, I was 15. Mom would let me take the back roads to a small store for bread and milk. I still didn't have a windshield, so as you may suspect, the upholstery blew in the 40 mph breeze, and the gravel road dust was a problem. There was one asphalt road to cross, so I would pop the clutch in the gravel and hit the asphalt, and thrill to the sound of the squeal. I'll bet a lot of you did that. Another thing I remember was the seat was worn out and had broken springs, so I used a gunny sack full of rags to sit on. (Maybe that's why nice upholstery is important to me now.)

As my 16th birthday was approaching, I got a windshield from a junk yard for 50 cents. That job, as I remember, was only "a little bit" easier than putting a 16" tire on a 17" wheel. Now the car was ready to take up to Washington State Patrol so I could get my driver's license. The written test went fine. They did a vehicle exam, and then I had to take a patrolman out for a driving test. I was nervous, but things went fine, and I got my license. My INDEPENDENCE had arrived. On the way home, dad congratulated me and treated me to a full tan of gas--the first and last full tank I was to have for a long time.

With my newfound independence, Friday nights became a lot more exciting than watching TV with mom, dad, and my little brother.

Even though the car was a coupe, we could easily get a double date foursome into the front seat. The car would pop out of high gear, so I had my date sit on the gear shifter. One time I got up to max speed of 60 mph. When I let up on the throttle, the gear shifter popped out of high gear, and the grinding gears vibrated through the shifter that my date was sitting on. It startled and scared her so much, that all she could do was scream!

Now I had another problem--the radiator leaked. On the tractor we had at home, dad would fix this by putting in some cornmeal. Why not? I will try it in my car. This worked for two or three weeks to start with, but each time, it took less time to leak out. Towards the end, the radiator was starting to plug up with cornmeal, and the water leaked out almost as fast as I put it in. My trips became "from gas station to gas station" for radiator fill-ups. The battery I'd put in the car had a bad cell, so I carried a crank with me. More than once, I got out in the middle of a busy intersection and hand-cranked that thing.

One day, I was backing out of the garage and caught the open passenger door against the wall. It broke a hinge and destroyed the rotted wood frame that those old Chevys had. The only thing that held it shut was one hinge and the door latch. I had to load passengers from the driver's side.

The first day I took the car to school, two classmates came over for a ride. Before I could say anything, they opened the door. It fell into their hands. We shut the door and went around the block. Trying to impress them, I wound up in low gear, and about that time, the heater hose blew off. It was a chilly autumn morning, so the inside was filled with steam.

That morning, all I heard people talking about was my two classmates nearly getting scalded, and how my car fell apart in their hands. That's when I started disliking my car.

That ended my independence. The most humiliating part was that next Friday. I had a date to a dance. Can you imagine my feelings--going to a dance and having to sit in the back seat, next to my date, with my dad driving the family car? How un-cool!!!

Great story Dick! Sue wants to know if this car could make it to the top of the hill in your old alfalfa field.

Yep i agree, great story Dick. There's something special about the 1936 chevy coupe. I fell in love with it, the first time i ever saw one. I can only dream about owning a 1936 chevy coupe.

That was wonderful. It brings back memories of my first car. A 1931 Ford A Model coupe. However , I paid big bucks for it $125 in 1961. What a deal and a lifetime of stories. Thanks for your rememberances.

Enjoyed your story about your car even out here in Nebraska where I am sure many kids had a similar experiance.

I've bought my '36 Chevy Coupe in the summer of 1965, just before my senior year in High School. Drove it one year, then put it in my folks garage, where it's been ever since while I was a career Army officer. Now, at age 60, I'm going to go get it and get it running again!!! Heck, it only has 37,000 miles on it, as it had been in a garage in Wisconsin for 15 years before I bought it for about $330 (the guy needed money for college). Probably cost me more than that to get new tires and get it running. I'm looking forward to driving it again. Your story was GREAT! THANKS Ron

There is a fascinating period film made called "Master Hands" which shows the building of the 1936 Chevrolet from start to finish. Just Google that title or check Youtube.

dick w........it seems your first car, '36 chevy coupe brought forth many good stories from people of all sorts of life from around the country....loved your story and the many others it created......also, thanks much for the great memories for me too.......nicks custom '49 chevy

Thanks for the story, I just bought a 36 chevy coupe. So far I took it around the block a few times and up to the farms to get some fresh vegetables. I was telling my wife this was a good buy and when we finished the battery was old wouldn't start. She is not happy. I still love it and hope it will make the hotrod I am dreaming it can be.

Dick W I can't believe that nearly three years have past since I first wrote (anonymously) my comment to you on June 16, 2012 probably only because I was not logged in to the site at that time...I would therefore, again like to thank you for the great photo and story that you created back then only this time while I'm signed in so you can better relate to it...Your Pen Pal and story teller too.....Nick

Great story on your 36 Chevy coupe, a really nice looking car. Too bad about the engine. Did you replace it or get rid of the car. Back then we made it happen and kind of winged it as we went along. I see you're still racing and keeping young restoring cars! Keep it up, regards, Mario