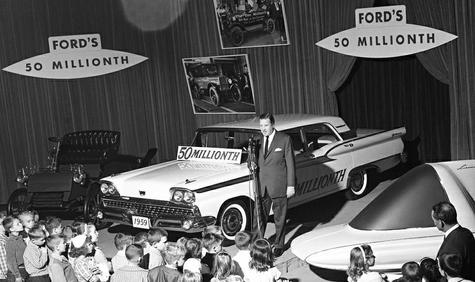 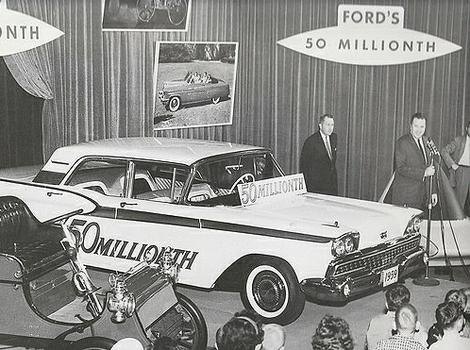 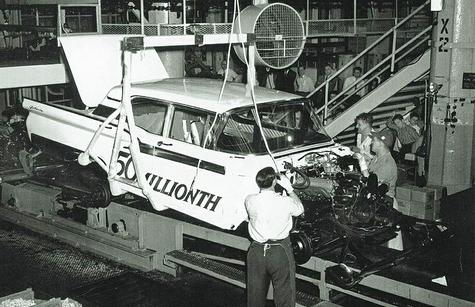 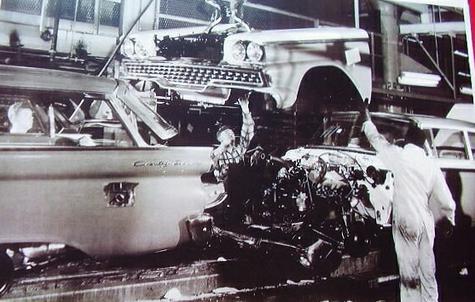 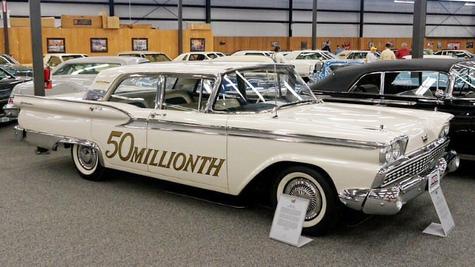 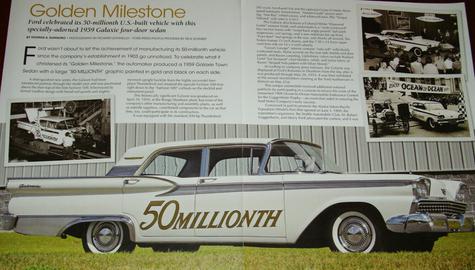 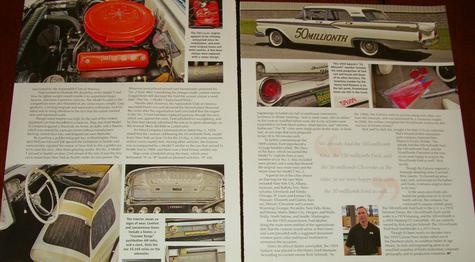 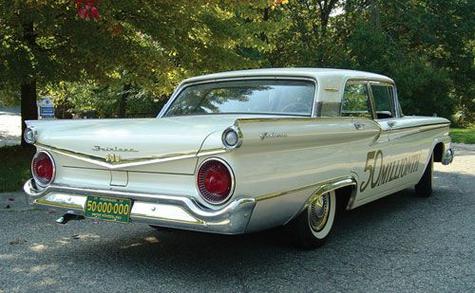 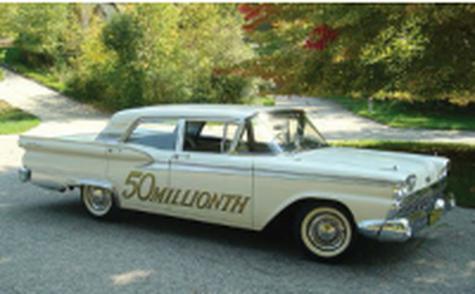 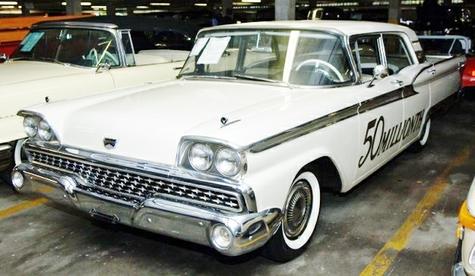 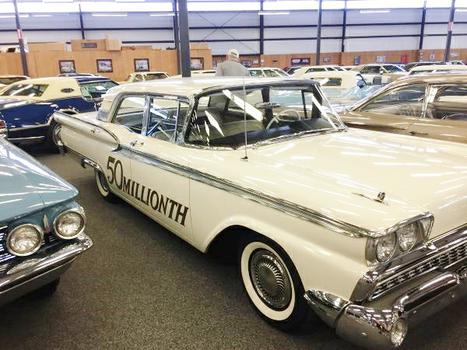 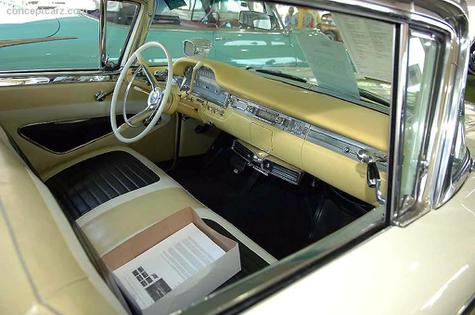 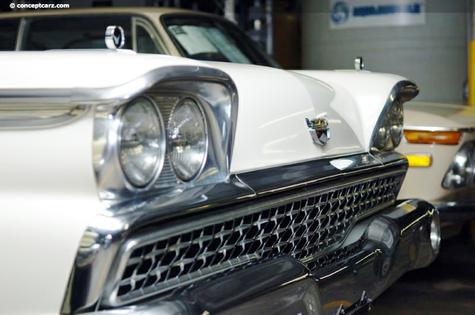 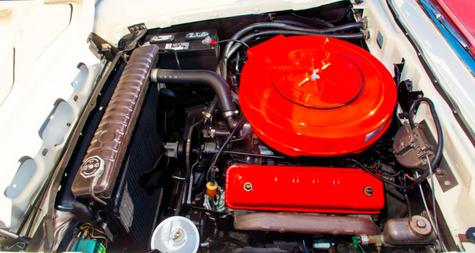 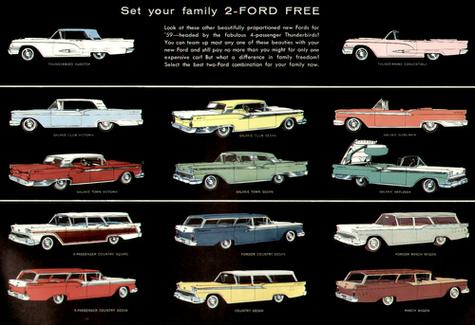 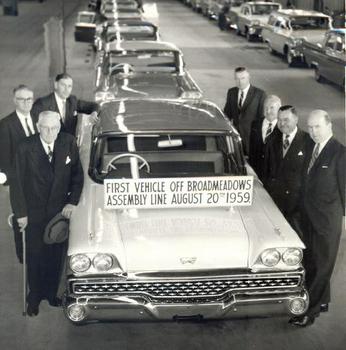 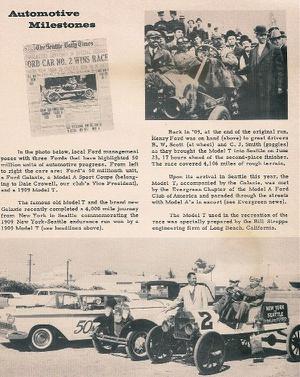 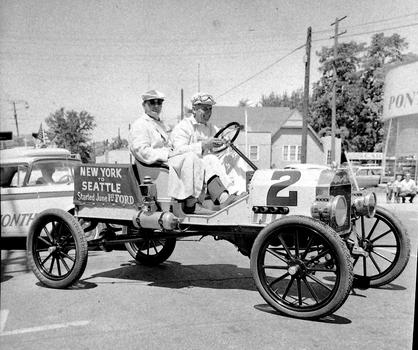 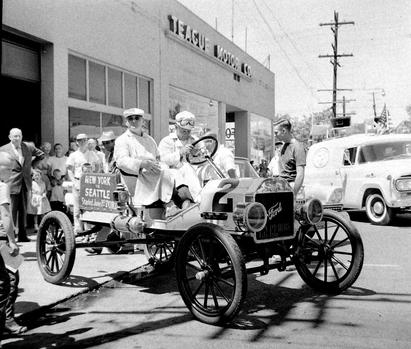 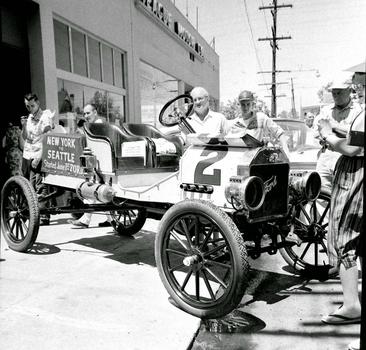 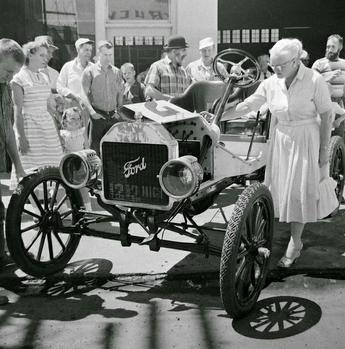 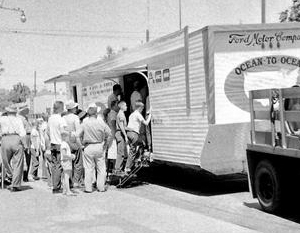 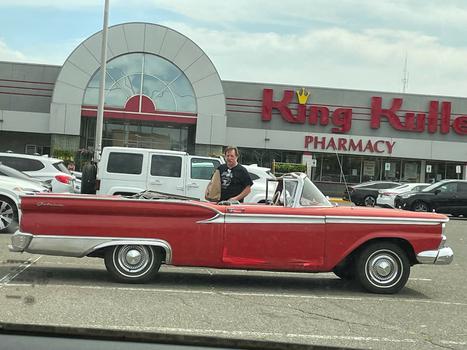 Ford's 50-millionth vehicle was made at the Dearborn Assembly Plant in Michigan on April 29, 1959. It was equipped with the standard 200-hp Thunderbird 292-cu.in. two-barrel V-8 and the optional Cruise-O-Matic three-speed automatic transmission, "Master-Guide" power steering, "Sun Ray" wheel covers, and whitewall tires. The "Torque Tailored" axle ratio is 3.10:1. Currently at the Henry Ford Museum, Dearborn, MI.

Another gleaming thread by the man that has the inside info on all these HISTORICAL CARS.

I see it's another model painted in white. I wonder if that's planned or happenstance.

Thanks Rob for your kind words. I'm pretty sure the whole car was planned from the beginning to be the 50 millionth. And why white not sure but seems to be loaded with options. In any case it survives today at the Ford museum.

I like the 59 Ford but the car looked very dated next to the 59 Chevy. Sitting very high at the front compared to the low slung Chevy. I remember we had a neighbor in the mid to late sixties that had a brown four door 59 Ford.

I agree George, the 59 Chevy with it's batwings looked more exotic than the 59 Ford. But sales figures were close, look at this. Production Figures for 1959: Chevrolet 1,462,140 Ford 1,450,953 They used to play with the numbers but it's almost dead even. Hard to believe I say.

Yet I have been hearing for years that Ford outsold Chev in 1959 and also 1957. Who knows what to believe in this regard. As far as I am concerned Chevy outshined Ford in both the 57 and 59 year by far. I say this yet I like both the 57 and 59 Ford and always have. They are both classy looking cars. Cheers.

There is a difference in Production figures for a given year vs Sales figures for a Model year. Since Production figures end on Dec 31st it would be different for Model year which carries into the next year. Also car manufacturers would ship unsold cars to dealers to boost their production numbers and dealers got stuck trying to sell them. Lots of games with sales and production numbers!

Car sales are just like life in general, a lot of games that people play.

It is interesting that ALL the milestone cars that GM put out were always two door hardtops. Here Ford is using the family sedan. Ford knew this was the bread and butter car that the masses would buy, not the two door hardtop. On the other hand GM is going to sell more cars than Ford ever could, so there is no need to prance a family sedan around as a milestone car. Jazz it up a bit, while prancing around your milestone. Of course GM would plan the production around the top of the line two door hardtop as that milestone vehicle. Cheers.

Good observations there George. It's all about getting the most sales and GM seems to know how to do that.

I have been to The Henry Ford museum now about eight times since I first went in 1989. I think I am about due to go again, once this Covid-19 melt down is over. I can never get enough of that great museum. I prefer to go alone so that no one can drag me down. I once made the mistake of taking my wife there back in 2007 and we only stayed for three hours. I usually get there when it opens and then leave just before they throw me out. Cheers.

I love car museums too. We used to have one here on Long Island but unfortunately it closed down years ago. I don't know where all the cars went. Probably Jay Leno bought a lot of them. He has a tremendous collection.