This is an article I wrote for our club magazine -

The journey began after Christmas 2012 when I started looking on the internet for classic cars for sale in the US, as you do. I had done everything I wanted on my much loved ’56 BelAir after 10 years of ownership, and was looking for something new and different. Having long been a fan of most American 1950’s models, this is where my search began, but after a while your eyes begin to glaze over as there is so much choice available, and it’s difficult to pick something that stands out at a reasonable price.

During my search I came upon a ’57 Pontiac Safari, which is the sister to the famous Chevy Nomad, but they only manufactured 1292 that year so it was a very rare car. I really fell in love with this vehicle, but after numerous phone calls to the private owner in Davenport Iowa, it all came to naught as he was very reluctant to sell to an overseas buyer and wouldn’t proceed any further.

Now that I had the Pontiac bug, and really only liked the ’57 as the ’55 & ’56 didn’t quite look right to my eyes, and the ’58 was getting to long and wouldn’t fit in my garage, I was able to narrow my search down. Believe it or not there were only two ’57 Pontiacs for sale in the US that I could find which were desirable versions (discounting 4 doors, as I had already been there), a US$85k black Safari fully restored and hot rodded, and a 2 door Hardtop, also rodded, but about a third of that price.

After numerous phone calls to the dealer in Georgia that advertised on behalf of the ageing and ill owner who was selling his collection, a price was finally agreed on subject to an inspection. The dealer was very helpful and recommended three independent inspectors, one of which I chose because his credentials stacked up better. His report was a little disconcerting in that there were a number of things missing from the car such as horns, wipers, stereo, and various screws, etc. The body, boot and floors were solid, the transplanted fuel injected 5.3 Chevy Vortec V8 and 4 speed electronic trans. were in good order, the interior trim was good, but the paint was not that great but looked OK from 3 feet away.

A further negotiation through the dealer resulted in a better price, and the deal was done. As you may have read in a previous article, the ’56 BelAir was sold at the Beach Hop earlier this year, so we were classicless for a number of months. It took about 8 weeks for the Pontiac to arrive in NZ in May before all the fun started with compliance and registration issues.

I contacted a certifier direct and he came to my home and did the inspection, which was reasonably comprehensive much to my surprise and agitation. He identified a welded steering shaft (from column to power steering box) that had to be replaced, a welded brake pipe, engine mounts that he didn’t like the look of (even though they had supported the engine for a number of years), fish plating of the chassis where the Chevy Malibu front end had been grafted on (again because he didn’t like the look of the welding), all brake and fuel lines to be secured to the chassis every 30cm, and rebalance drive shaft (even though it had been done in US) as the major changes.

I took the StarChief to Lee at Diffs R Us in Otahuhu to perform the rectification work, which he undertook admirably, and I would highly recommend him to anyone. After about four weeks the Pontiac finally came home, and I could start all the jobs I needed to do. I had to import from the US an electric replacement 2 speed wiper motor (same as Chev) which bolted onto the same linkage, a pair of horns, an electronic converter which reads the signals from the transmission and changes them to drive an electric motor for the original Pontiac speedo. It obviously hadn’t worked since the engine and transmission were installed, so I was very lucky that Customs hadn’t found this because I would have had a real headache on my hands. But what it has enabled me to do is set the speedo to read in kilometres, so no more calculations to do in my head when driving.

Finally the day arrived in July to take her (it is a she I have decided as no male would cause me this much grief) down for vinning. Apart from the usual wheel cylinder leaking, play in lower ball joint and drop arm knuckle, rear brakes uneven and hand brake (a foot brake actually) not working properly, the major issue was that the front rotors had been ground down to undersize in the US, and had to be replaced.

Club member Ian Bloxham helped me out now that he is retired from running his garage, although he still seems just as busy working on cars as before. The wheel cylinder, ball joint and drop arm were all rebuild, and the handbrake freed up. However my search for new rotors came up against a brick wall, as there were none on the country for the 1978 Malibu front-end graft. A Henderson based brake importer identified the rotor and offered to import a pair in his next container due in 6 weeks, which would arrive just as we got back from our US adventure, which was ideal. Upon our return early October a phone call to him determined that they hadn’t arrived, and I suspect he forgot to order, but he did offer to airfreight them for me at a cost of $500. This left me in a real pickle as I only had a few weeks left before it had to return for the final vinning inspection, but a quick trawl through the internet found a supplier in the US who had them airfreighted to me within a week for well under half the price!

A quick trip to Ian again to fit the rotors, and straight back to VINZ for the inspection, and Wahoo! we are registered and legal on October 18th (also our wedding anniversary) so much cause for celebration.

I’m now just onto fitting a stereo, replacing window rubbers and felts, and a host of little enjoyable jobs.

Now that I’m at the blunt end of all the hard work, I ask myself if I would still have gone ahead and imported the StarChief had I known that it would take 6 months to be fully legal and come with all the dramas and worries, or just purchase something locally that was ready to roll. A couple of month’s ago I would have said to myself that I had done the wrong thing, but now that all the hard work and pain is in the past I am happy with the car and the way it looks. I have a vehicle that is very rare and unique, and to my knowledge it is one of only two in the country, the other being a Super Chief with a shorter wheelbase and overall length, and the painted side rockets instead of stainless steel.

So yes, it was all worth it in the end. Now I’m just hanging out for some fine weather so we can get out and about, and do some cruising. 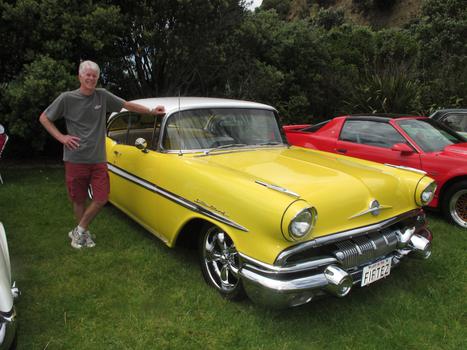 This photo was taken when I first got the Pontiac in 2012, and shows the wheels that came with the car when I imported it from the US into New Zealand. I changed these out to a wheel that looked a bit more in keeping with the style of the car.

Russell, I really enjoyed reading your old car bio. There is even more pride knowing you are only one of two 57 Pontiac's in your country. It must feel good to be special. Continued many happy miles or kilometers with your 57 time machine. Cheers.