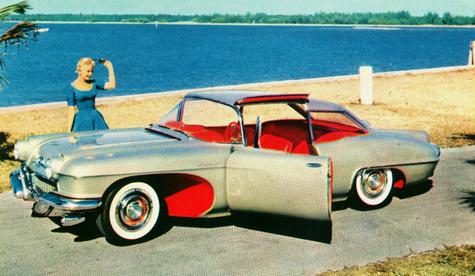 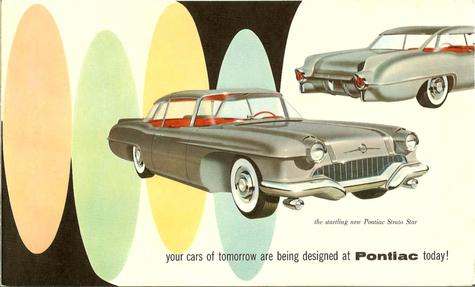 The 1955 Pontiac Strato Star brochure from the 1955 GM Motorama. 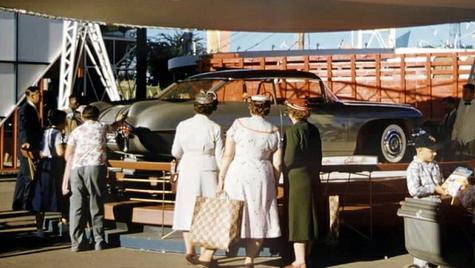 The 1955 Pontiac Strato-Star concept car was a 6-passenger coupe that debut at the 1955 GM Motorama in New York City. 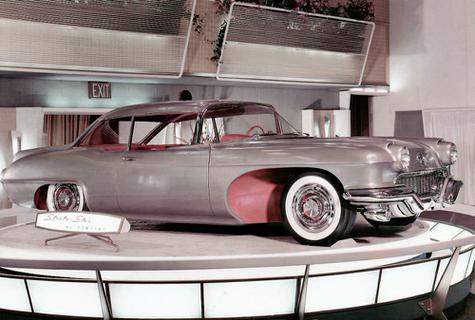 It was built for exhibition on the 1955 GM Motorama circuit. 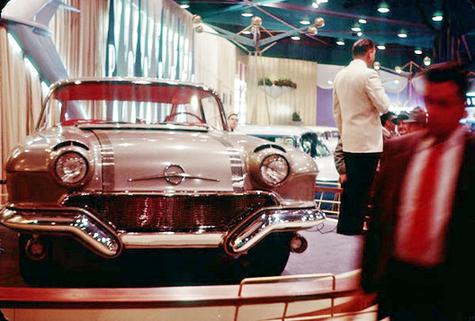 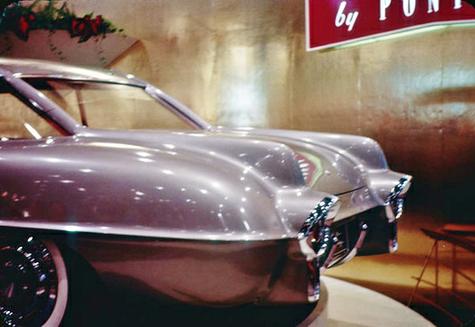 The rear of the Strato-Star was futuristic looking. An aggressively wrapped windscreen and rear window, the car offered all round visibility. 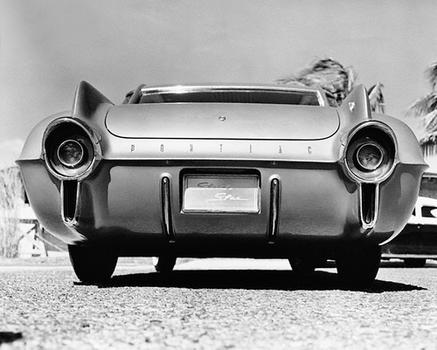 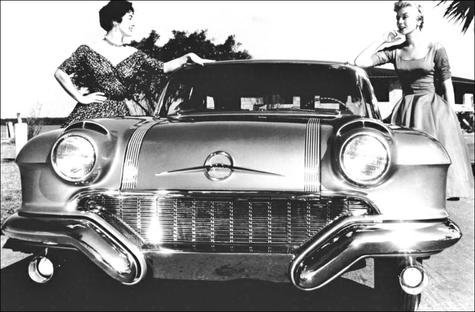 Hinged 6-inch roof panels built into the roof opened and closed automatically when the doors opened. 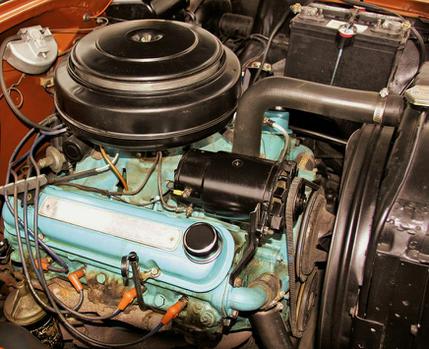 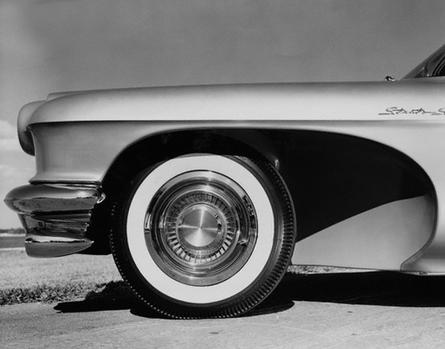 Fresh air intakes were built into each front fender above the single headlights. 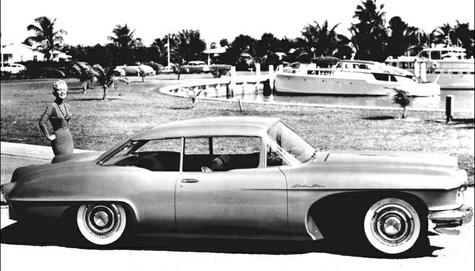 Fiberglass door trim panels were used inside the car. The roof was flat, supported by ultra slim A and B pillars and two cantilevered C pillars. 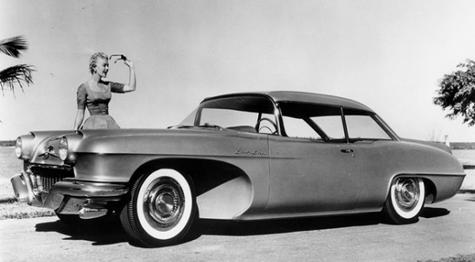 With a design virtually non-existent door pillars and massive amounts of glass, the Strato-Star could have proved an ideal travel car for families.

The legacy of the Strato-Star is that its flat roof and rear pillars were to become the GM future cars. 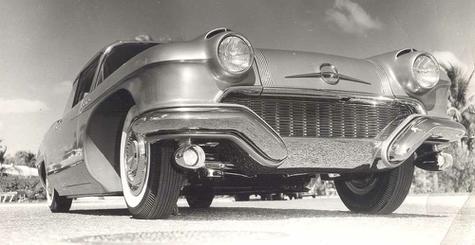 Parking lamps were built into twin pods suspended below the outer section of the front bumpers. 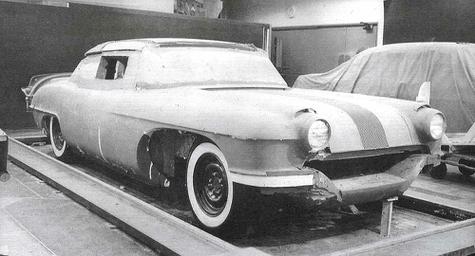 The Pontiac Strato-Star was styled by long time GM designer Paul Gillan under the watchful eye of Harley Earl. 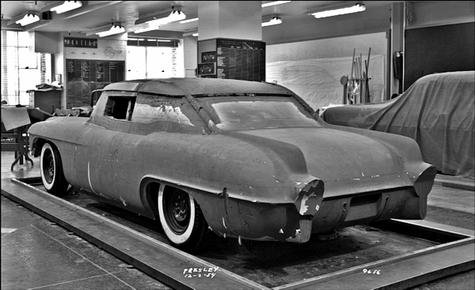 Paul Gillan head of Pontiac’s design studio was instrumental in transitioning Pontiac from being an old man’s car into a sports luxury offering. 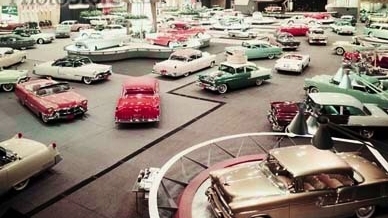 GM Motorama publicity boldly stated the car was “the most daring new design ever displayed.” 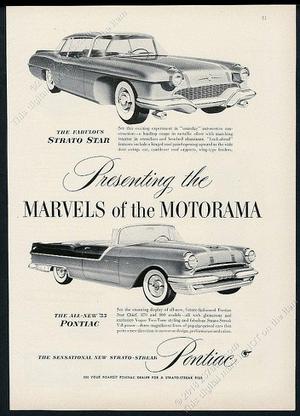 Unfortunately the Strato-Star was scrapped in the late 1950s. This was one of many 50’s Concept Cars to meet such a fate. Only a few concept cars survive today.

1955 GM Motorama Change for the better.

The 1955 Pontiac Strato Star Concept Car had many new features we would eventually see in the years to come. Flat roof, panoramic views, power features, curved fenders and many more.

GM designers looked for crowd reactions to their Concept Cars at the Motorama shows and invited comments good or bad.

I was fortunate to attend the 1961 GM Motorama in NYC with my Dad and it was a thrilling experience.

I walked away with a bagful of car booklets and literature that I would pour through for years to come.

Mario, this one reminds me, there must have been illegal drug abuse back in the 50s for designers...

I may be able to come up with something like this if I cobbled all the extra parts and pieces left over in my garage.

That is so Funny Rob, and I have to admit so very true!

Not sure if any illegal drugs were involved, but I think the Designers were poring everything they could into these Concept Cars all at once.

Wait till you see the other Concept Car Pages I'm working on. They get better! Cheers.

I think that you might have to be its mother to love it. All kidding aside, yes it is kind of not attractive but some styling cues came from it for future Pontiac's that were actually good looking. Cheers.

A big thing I see is the flat roof with wraparound windows that were used on all the '59 GM 4 door hardtop cars. Very stylish. Cheers.

I just can't imagine HOW those front wheel openings got past so many people who thought.........hey..maybe they won't notice.

I'm not one to knock styling for they say beauty is in the eye of the beholder.

What one sees as beauty, another cannot.

I do see Georges 57 as you say Mario. They started out great but something went wrong when they attached the rest of the car to it.

And who put eyebrows over the taillights to confuse me which end was the front from the back?

Reviewing some of the other posts on Concept Cars, I think BUICK had the talent when it came to designing Concept Cars. Theirs look more stylish than cobbled together.

Just my humble opinion and yes I will keep it to myself.

Seeing as how the very First Concept car was the 1938 Buick Y-Job I believe you have a valid point Rob.

After that the 1951 Buick XP300 was also a beauty, very modern and classy. The entire car flowed with styling that wasn't choppy or seemed to be added on like some of the other concept cars.

Good observation Rob. See you do know your stuff! Cheers.

Flattery will get you everywhere Mario, except my social security number, bank account info, my email passwords, and the keys to my Vette. Okay, maybe the keys to the Vette.......just because you're a car guy.

Well I just tell it like it is Rob, sometimes good sometimes not, but thanks for the offer for the keys to your beautiful Vette! Cheers!

I was being way too kind earlier. This concept car kind of gives me automotive nightmares. From any angle, there is no justice to be done here. GM lead in concept cars and started the whole entity but Pontiac dropped the ball with this thing. Cheers.

It surely wasn't one of the better GM Concept cars from an overall standpoint. I think the designers just wanted to try out as many different styling designs as possible.

If you look closely many of the ideas were adopted later on but just not on one car.

But overall the Pontiac team came up with many great cars and body styles. Cheers!