Met George Hurst in 1959, started with Hurst - Campbell in 1967. One of my many projects was the creation of the first HURST / Olds prototype. I was one of three engineers that put the car together under the direction of Jack Watson. We built the car inside of a 45 day time frame, at Warminster, Pa headquarters. A total of 515 1968 models were built, all of which were assembled at Mich. facility. Later I will expand on some details. 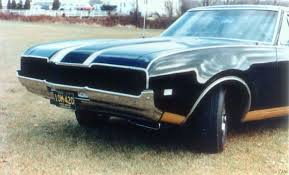 Front view with hide away headlights. Only on prototype. 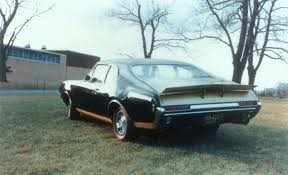 The rear view, with the articulating wing. Made from alum to match the angularity of the trunk lid. It was originally activated by a 12 v motor mounted under the trunk lid. I think we used a power seat motor. Brake pedal thru micro switches raised and lowered the wing. This feature did not make production, due to the Oldsmobile tight production schedule. 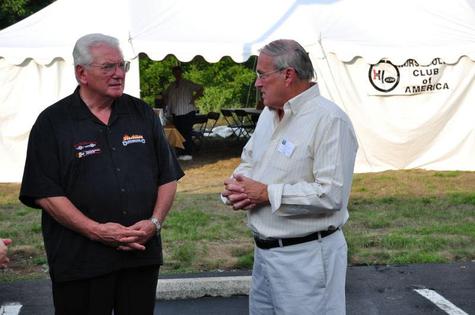 Jack Watson, and myself at a 2012 Hurst Nationals, Gettysburgh, Pa. 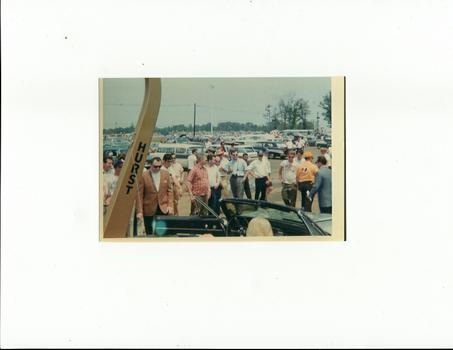 Our first 1968 Hurst / Olds parade at Englishtown, NJ. 1968. George, Linda, in pic. I worked at the shifter Hospital that year, and took the pic. 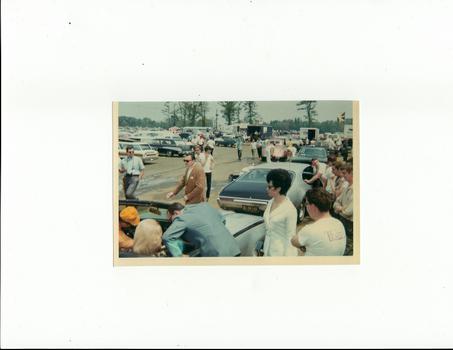 Another pic of the Hurst / Olds parade at englishtown, NJ. George, Lida, and Linda in pic.

I will provide more info as we go along. More info, about the middle of Nov. 1967, the car arrived at 50 west street road, Hurst Hqtrs. Each of us had a certain responsibility of action to do. Almost all of us at Hurst were car people one way or another. So, the car was a 1968 Olds Cutlass post coupe, black, with black interior. bucket seats, 350 motor, auto trans. A spl built 455 c.i. Olds motor was shipped in from Lansing, Mich. & installed. We installed a "Dual Gate" shifter, w/ small console that we would sell. Relocated the frt turn signals, to inside frt bumper. Added hideaway head lights, I think GTO buckets. we used light fixture diffuser egg crate, to match grill, sprayed flat balck. Cold air package under frt bumper. The alum wing was designed by us, and fabricated at a airport in NJ. The micro switches were used to limit the travel of the wing, up or down. A cutoff switch was loc under dash. Five Hurst wheels were installed, the car was sent to local body shop, George's friend. Gold paint was applied to deck lid, wing, on hood areas, lwr side panels. I created the engineering emblems, they were not finished being cast in time, so they were sent later. We all worked long hours to finish the car, Project # 672, "Personalized Olds". IT was trailered off to Olds, and very well received. To this date I do not know what happened to the actual car, I spoke to a lot of people with no positive info. 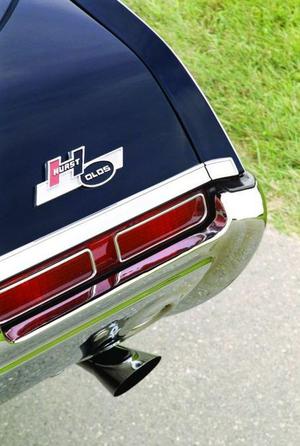 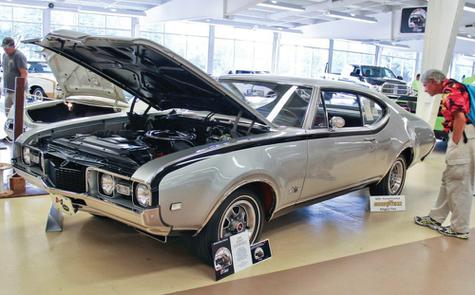 THIS IS A RESTORED 1968 TAKEN AT THE HURST NATIONALS, CARLISLE. 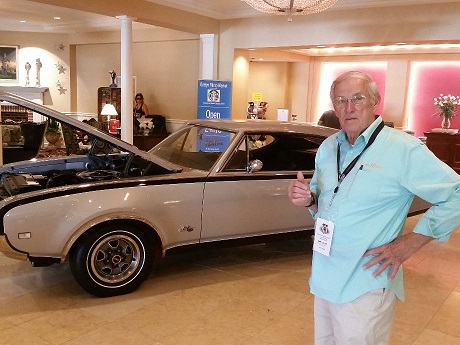 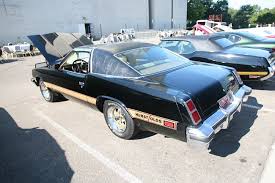 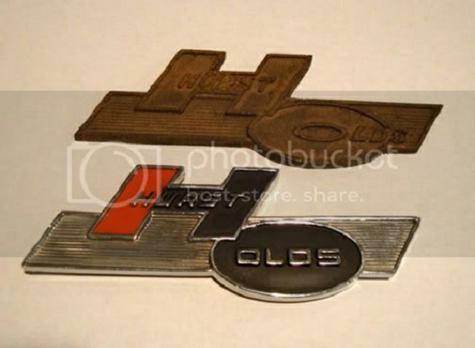 VERY RARE PHOTO OF MY ORIGINAL "H / O EMBLEM", AND THE PRODUCTION VERSION USED ON THE 68. IF YOU LOOK CLOSELY, THE CTR OF THE "O" WAS FOR OLDS. SO THEY CHANGED THE OLDS TOBE IN CTR OF THE "O". 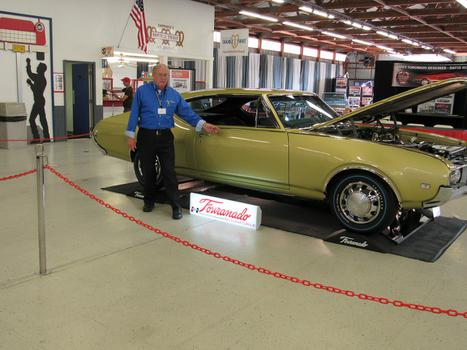 THIS IS A ONE OF A KIND 1968 442, SHOWN HERE A CARLISLE. WE BUILT THE CAR IN 1968, IN MICH. IT HAS A COMPLETE TORANADO DRIVE TRAIN, I RODE IN THS CAR WHEN IT WAS BUILT. IT WAS SOLD, USED AS A REGULAR DRIVER, STORED FOR A NUMBER OF YEARS & PRESENT OWNER PURCHASED IT. RESTORED, HAS BEEN TO MANY SHOWS. 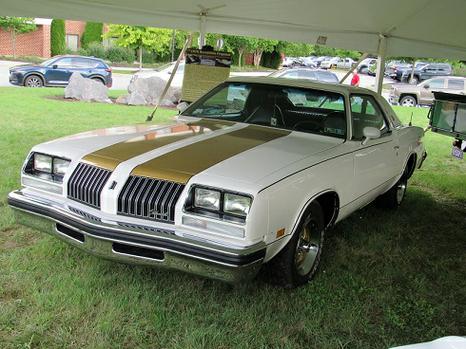 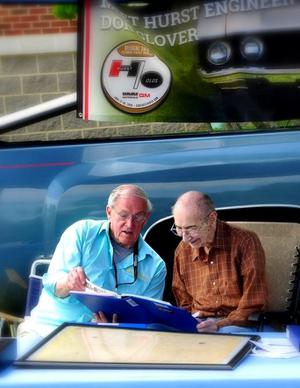 2019 Photo of Bill Campbel ( co-founder of Hurst ), and I at my display in West Chester, Pa. Del Valley Olds Club spring Show. 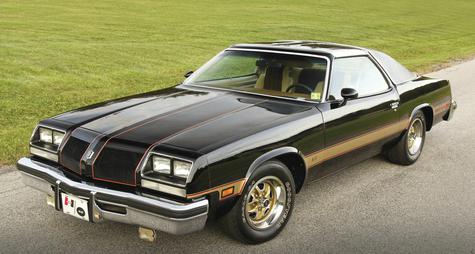 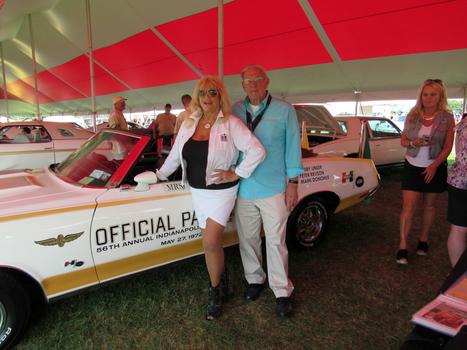 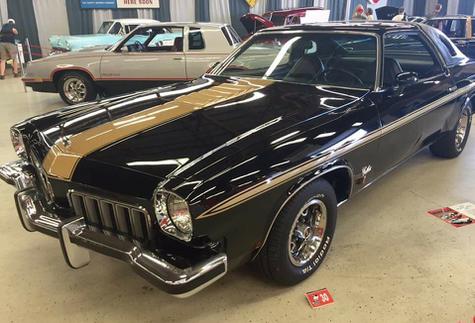 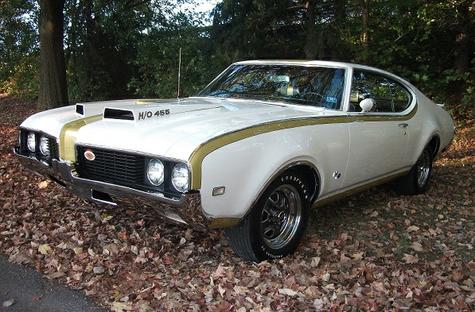 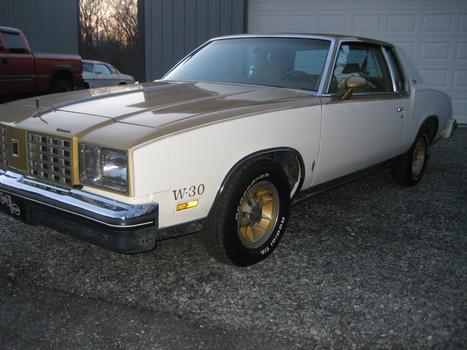 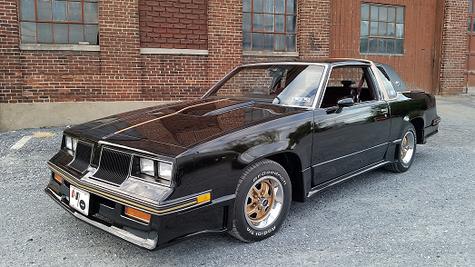 OH MY! Be still my over-revving heart.....A HURST OLDS.

AND WHAT A UNIQUE ONE..........so many uninformed car enthusiasts seem to think the 1969 was the first year for the Hurst Olds in all it's brilliant white and gold.

The avid car lover knows the 1968 was a lot more subtle in it's call out badging and paint.

THANKS FOR THE COMPLIMENT, I GUESS MARIO WILL BE IN TOUCH. I HAVE A GREAT DEAL MORE TO SHARE WITH MY MANY YEARS AT HURST. I ENJOY THE GIVE BACK INFO TO ALL OF US CAR NUTS. I STILL DO CAR SHOWS, ON EAST COAST.

Great pictures and story Don. It's nice to know the Engineer behind the infamous Hurst Olds! That was an awesome car back in its day.

Everyone wanted the Hurst shifter with the decal on the window. It was popular on cars on the 1/4 mile tracks back then.

I was fortunate to buy a new 1969 Camaro SS 350 with the Hurst close ratio 4 speed shifter and it was smooth and quick. Took many cars off the line in the streets. Never lost!

Thanks for sharing and if you come across more pictures feel free to add them. Us Gearheads love to see pictures and relive our fond memories. Cheers, Mario

Added more info, that you may enjoy. Regards, Don

Great inside info Don. Those must have been stressful trying days for you with all the competition trying to get their redesigned cars out there. I remember all the Motor Trend mags with new cars out every month.

Investigating whatever happened to these cars and concept cars is always fun. Especially when its located or a definitive answer as to what happened to it.

Thanks for the update, Cheers, Mario

Very interesting. I'm especially fascinated by the Fouranado. From a distance, those rims are a clue that something's up. THUMBS UP !!!

Just came back to this thread to revisit my OLD friend. Get it? OLD as in OLDSMOBILE. Can't say no to a 442, a Hurst Olds, or Olds in general.

So many things we would never know if it weren't shared with us, the appreciators of the details.

thanks for the compliment, I dd a show last mo. in lebanon, pa "Don Glover Hurst Engr", Google.

The Hurst Oldsmobile's were always very special cars, no doubt about it. Seeing that photo of Linda Vaughan brought back memories of when I met her about five years ago in London, Ontario, Canada at a major annual charity car show. She just came across as being a real sweet heart and took the time to talk to you with out having that "Star" attitude. I really enjoyed meeting that wonderful lady. Cheers.