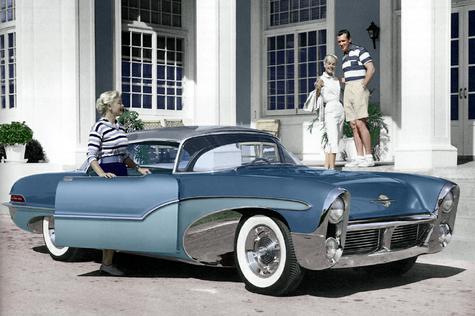 The 1955 Olds Delta 88 Concept car was styled by Harley Earl and was very rounded with the dipped belt line that would permeate the GM line by 1957-58. 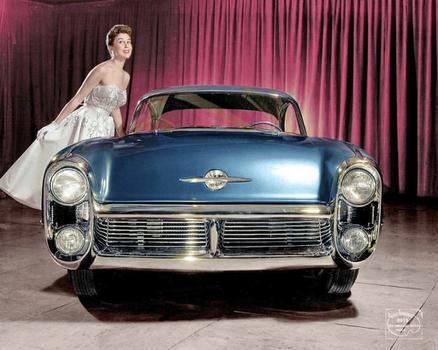 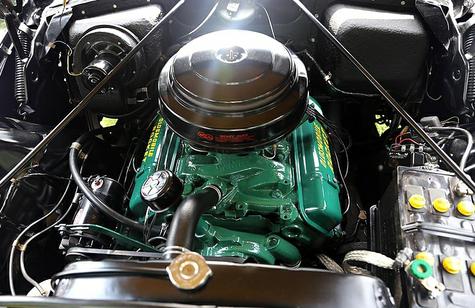 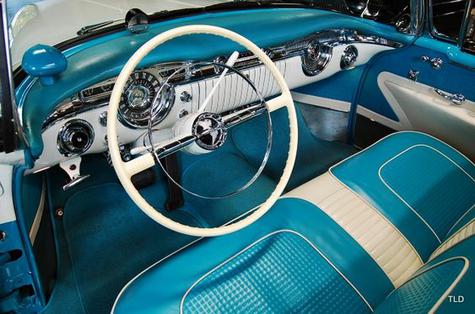 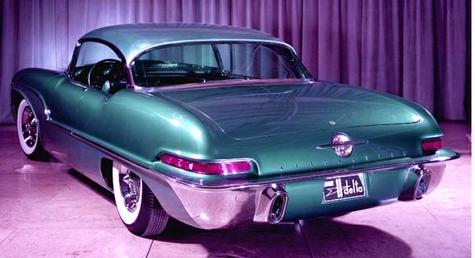 The 1955 Oldsmobile Delta Concept Car’s fate is not known. It just may be in someone's car collection or museum. 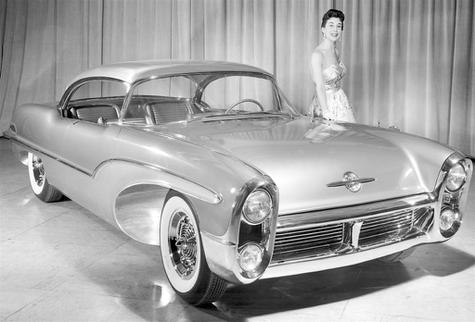 The Delta 88 was designed to consider new materials and design. Dual fuel tanks in the rear fenders, cast-aluminum wheels and anodized aluminum trim. 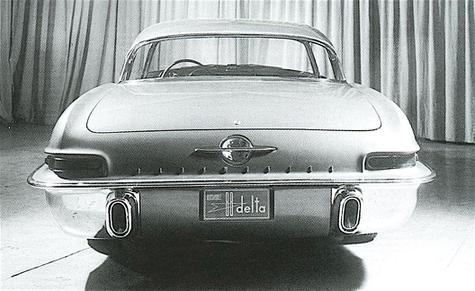 A center console for radio controls and extra storage was added. Chrome Exhaust pipes are part of the bumper ensemble and are oval like the headlight assemblies.

The roof is very similar to that of the 1955 production car, though the A-pillar is vertical instead of slanted.

One of the many attractions of the 1955 GM Motorama. It wasn't way-out futuristic as one of those styling staff showoff jobs. 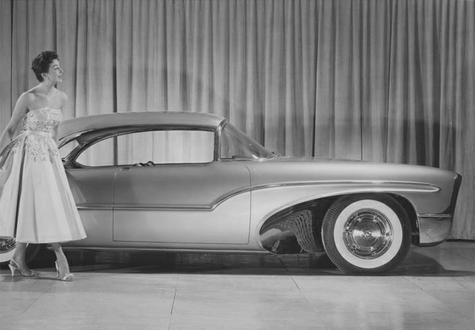 The hood is lower relative to the fender line which has a dip where it passes the passenger compartment. The car's design has a theme of roundedness.

The grille is not oval, but the headlight assemblies are. It represents a direction Harley Earl had in mind before his retirement in 1958.

1955 was a Great year for GM and all the other car manufacturers. New engines, new two tone colors, new styling, new excitement. I remember the year well and loved going to see the new cars at the dealers with my Dad.

This Olds 88 Concept Car was a glimpse into the near future for automotive designs and GM led the industry!

The year of 1955 was hard to beat for sales of GM cars. If I remember correctly it was not until 1965 that GM beat 1955 in sheer number of cars sold. Mario, thanks for all this amazing automotive stuff you post here. It is very much appreciated. Cheers.

Yes, correct George, and Thank you. GM's best year for car sales was in 1965. Chevrolet alone sold 1.7 mil cars in 1965 beating the previous best in 1955 of 1.6 mil. Those were the days when GM was King and I am fortunate to have seen it all happen. Cheers!

Hey Mario, wanted to wish you a very Merry and Blessed Christmas. Thank you for all the work you do for US, and yes I believe it's a labor of love. Please continue "working" for us and bringing us more content that we rarely find on other websites.

I heard Santa may be going to an Electric Sleigh soon.

Thank you Rob for your kind words and I want to wish you a very Merry and Blessed Christmas also. I really enjoy all the work I do for all of you, and yes it is a labor of love.

I "inherited" my Love of cars from my Dad and thank him for the Joy it gives me.