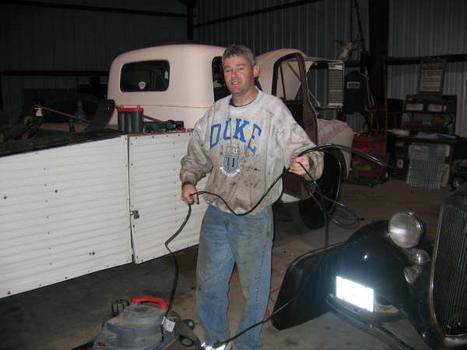 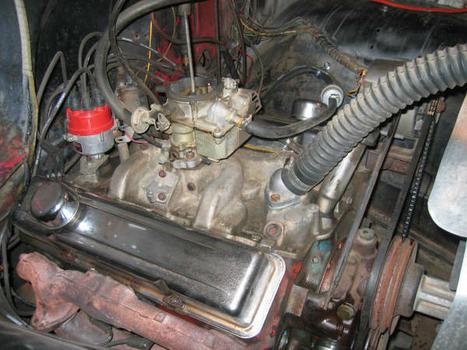 The journey began back in 2003 when this old '53 Chev. ramp truck hauler was purchased as a package deal with thePlain Wrapper '55 drag car. As the story goes it hauled that wicked '55 to and from many SoCal tracks for almost 3 decades. I reluctantly sold the hauler a short time later, but always missed it. Well just before this year's annual trip to the California Hot Rod Reunion in October, with the help of my buddy Bill - we were able to track it down and bring it back into the family. Unfortunately, over the past 3 years it has sat mostly unused and needed alot of attention to make it roadworthy enough for the 1100 mile trek back to Washington. It was shoved back in a corner with a basket-case '64 Galaxie on the back. It took a half day to get it out and see what was there. It was all there, just like I remembered it, but it needed alot of TLC.

So, during our stay in SoCal for the CHHR, I spent a few days working on the old girl. Down to Bakersfield to get new tires. The brakes in back were locked up with a set of broken springs. So, with the help of my buddy Jeff, off again to Bakersfield to locate a set of springs. Well after visiting South Union Truck Repair, we were able to get the 2-speed rear diaphram we needed, but not the springs.........After about 10 phone calls, a set was finally located. Off we went to Chester Avenue Brake in Bakersfield to see what we'd find. they were not exact fit, but the only thing available, so we took our chances and grabbed them at $46 for the set!!! Back to the Solo Speed Shop we heated them up and modified to fit. Good to go!

New tires/wheels remounted. And these are a bear to do (split rims) as each wheel weighs about 100 pounds or so - there were 6 in all! The brakes were all checked and adjusted. Bearings repacked. The engine was a solid 350 SBC w/ 2 bbl carb & intake, running an old Mallory Dual Point, and clip on plug wires - we are talking OLD! So I replaced the plugs and wires, and tuned her up best I could. She still wasn't ready for the long trip home and my time was up and I had to head back home, so the fix-it-tour would have to have a part two before we could get it back home.

Another purchase was made that week also, as Kevin Reed was able to purchase a mint '31 Ford 5-window coupe that will soon be known as The REEDSTER Coupe. Bill at SOLO Speed Shop found this gem and saved it just for Kev. Perfect!! So, the plan was made to get the hauler running soon and haul the Reedster Coupe home too. 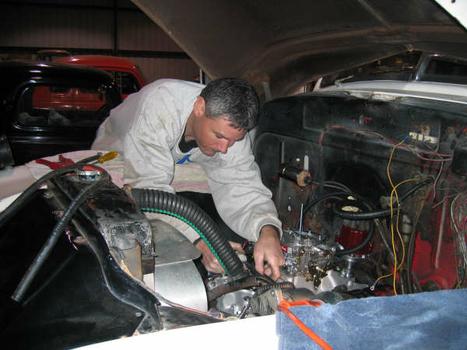 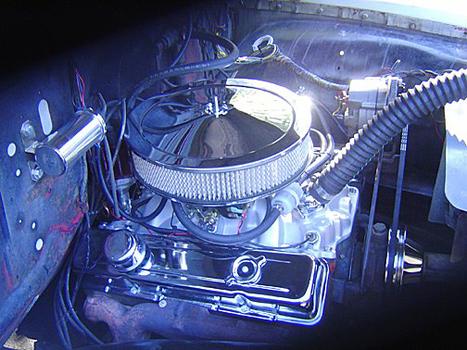 As I contemplated the changing weather ahead, I knew I needed to get the hauler home sooner than later or deal with mother nature as winter is around the corner. So, a date was set, and buddy Jeff and I took some tools and a one way flight to LA to try and get the old hauler back on it's feet for the trip home. We arrived on a Wednesday (Oct. 25) and started working on it that night. The plan was to upgrade the the intake to a 4 bbl with new Performer and Edelbrock carb. Then replace the distributor with a nice MSD electronic. We spent the next two days upgrading the intake/carb, distributor change, and rewiring most of the truck. A new set of gauges were installed, along with alot of little stuff. Thanks to Bill for letting us hang out at his cabin and take over the SOLO Speed Shop for a few days. He would help out in between his runs to Pine Mountain to collect his poker winnings.

We got her all buttoned up on Friday night and planned on taking her home Saturday AM. We were up early Saturday, got all our tools and supplies loaded along with the Reedster Coupe. Down the hill we headed for the Flyin' J truck stop for a good breakfast and a chance to check out our work on the truck. She did great although the old electric fuel pump was not able to keep up with the new combo. Luckily we already had a new Holley pump just in case this happened. So we broke bread, and commenced to changing out the fuel pump and were on our way. 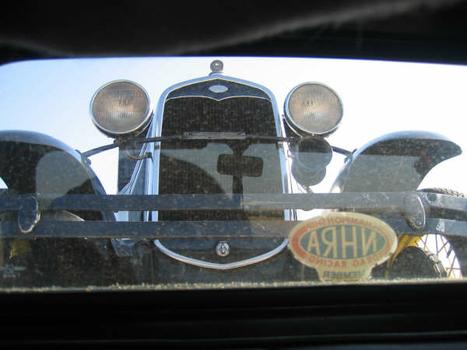 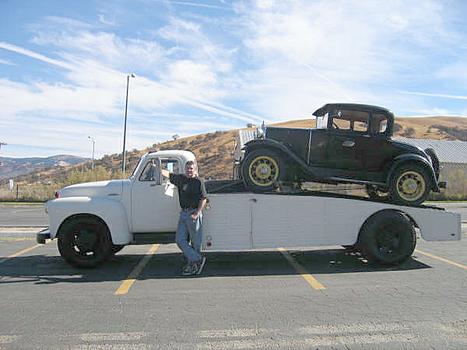 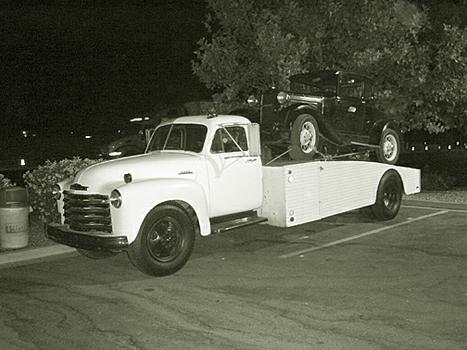 One little issue we didn't have time to fix was the speedometer....and the fuel gauge. Oh well, we were all set up as Jeff brought along his GPS so at least we knew how far we were going between gas stops. Gas stops.....there were many. We averaged 7-8 MPG and the tank, from what we discovered was about 15 gallons. Just past Sacramento we decided to find out just how far we could go............after all we had a back-up plan (two 5 gallon fuel containers full). We eased off the road somewhere past the airport and transferred fuel via out makeshift gas station. Hmmmm....I thought we could make 130 miles on that tank. I was a little off. 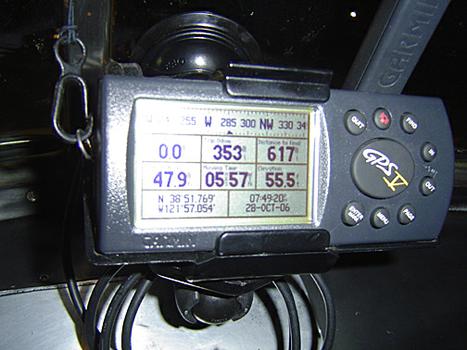 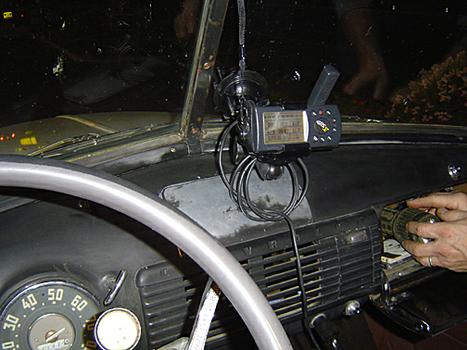 It was a great trip, with really no issues from there. The truck is a bit on the noisy side so we sported ear plugs to quiet things. It worked out great as they drowned out the road noise and you could still hear our makeshift radio system we hooked up. After all, you gotta have tunes on a road trip! It was a bit bumpy so we weren't able to play CD's without skipping so had to resort to alot of country stations (sorry Jeff). Jeff got tired of the twang, and broke down and bought a cassette in Weed, CA. It was Deep Purple and we must have played that thing 6 or 7 times through. 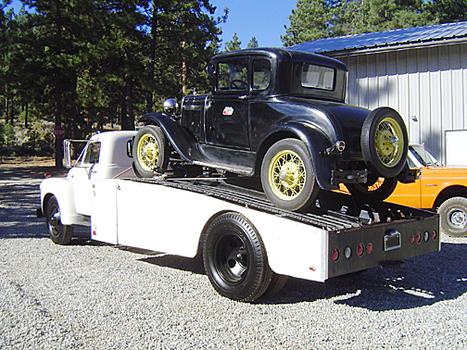 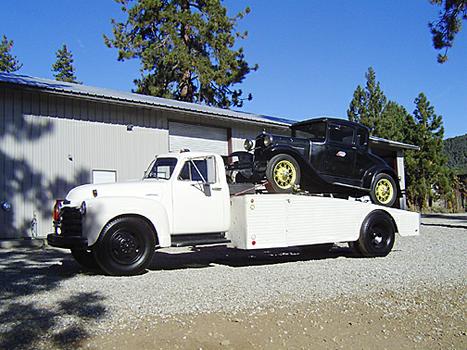 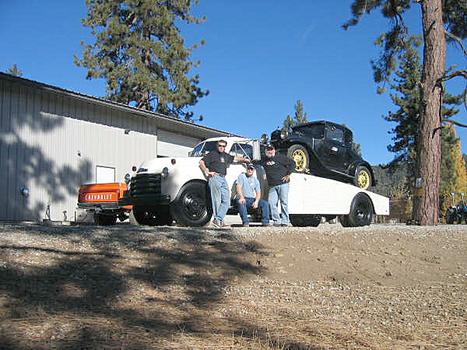 We pulled into Kirkland Sunday night about 8:30 PM and proceeded to unload the Reedster Coupe at Reed Cams headquarters. Then on the road for the final run to Poulsbo to drop off Jeff and get the hauler home. I rolled in at 11:45 PM and parked the truck. Almost 1200 miles, two days. My butt was sore.

It was an exhausting, yet fun trip. Thanks to Jeff and Bill - without their help it wouldn't have happened. 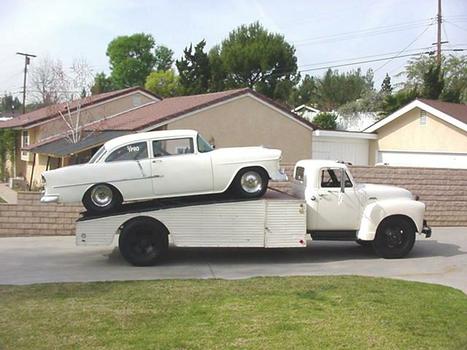 Now that is exactly what I'm looking for, a vintage car hauler that will pull the 30ft camper trailer and the S-10 ProStreet Truck! Anyone know where we can find another hauler like this one?? - L from Central Texas

LOVED YOUR STORY. WE ARE CURRENTLY WORKING ON A 53 CHEVY 1/2 TON FOR MY SON GREG. WE HAVE THE TRUCK SITTING ON AN S-10 FRAME. MY TRUCK IS A 1941 CHEVY SITTING ON AN ISUZU FRAME WITH 350 CHEVY FOR POWER. WHERE ABOUTS ARE YOU LOCATED IN WASHINGTON? I LIVE IN ISSAQUAH. GARY ESTES