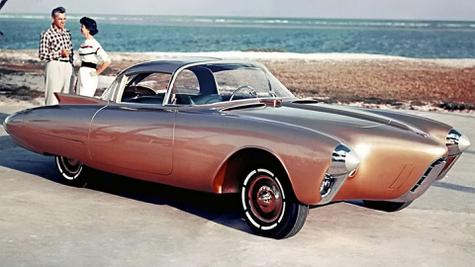 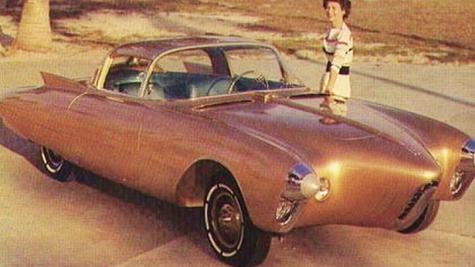 The Rocket has a fiberglass body with nerf-like built-in bumpers that give an overall rocket effect.

Painted in a bronze metallic hue, the Olds XP400 is a concept car to remember, and it was way ahead of its time. 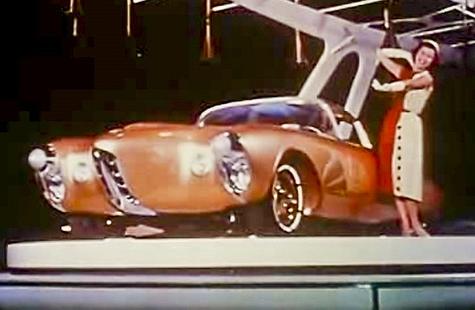 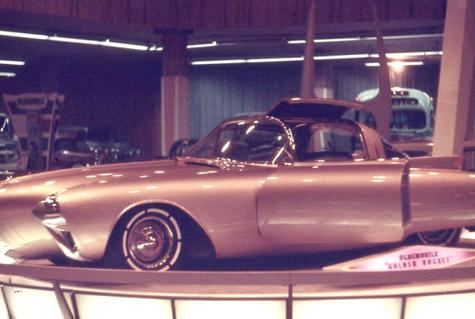 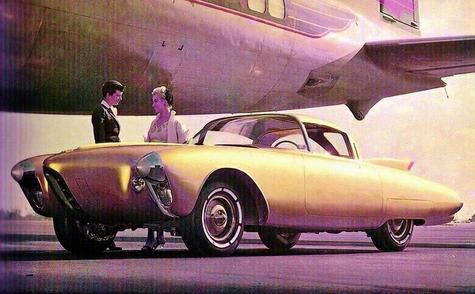 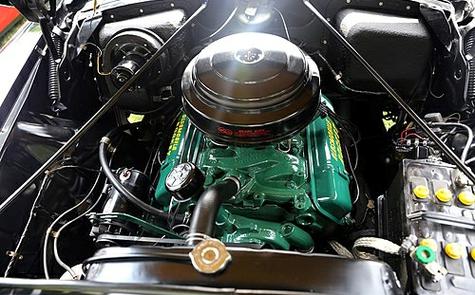 The car was powered by an upgraded 324 cubic inch Rocket V8 engine tuned to produce 275 hp. 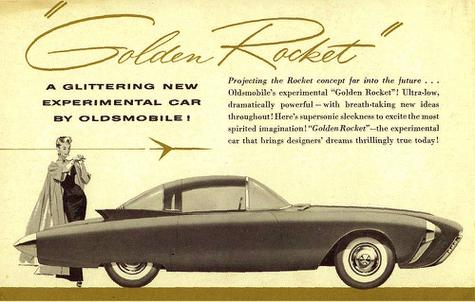 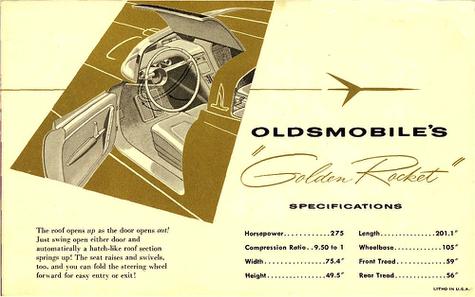 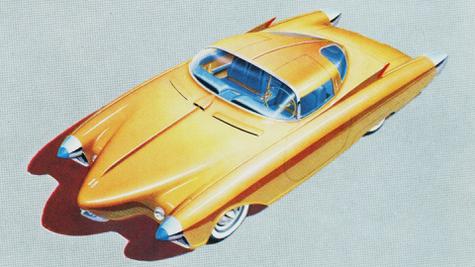 The Golden Rocket had an automatic transmission like all other Motorama show cars. 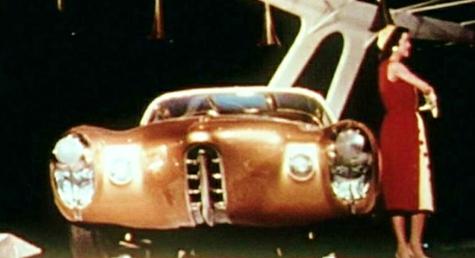 The Golden Rocket was revised several times and stayed on the show circuit for several years. 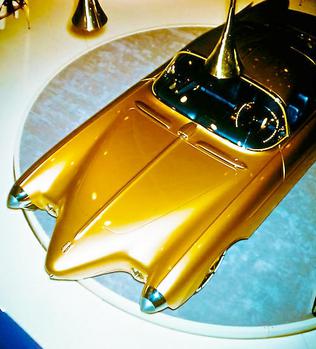 Other features include a swept back wrap around windshield, which had become a common design element by the mid-1950s. 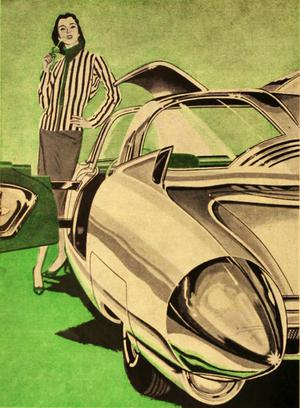 The roof is made from two adjoining panels that open upwards, giving the concept a Mercedes like gull-wing appearance. 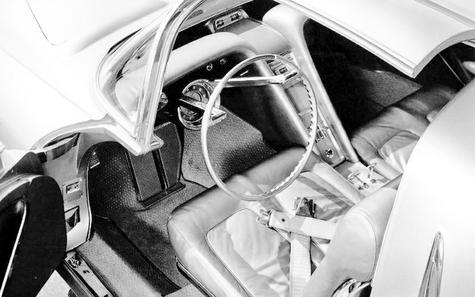 The car has a telescopic steering wheel. Buttons on the two-spoke steering wheel adjust it and the speedometer is mounted in the center. 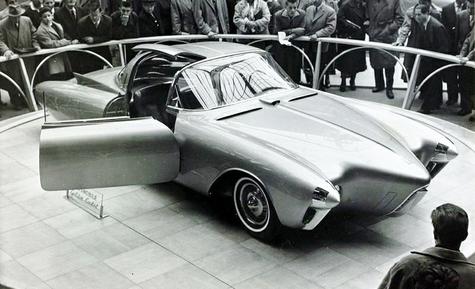 When the doors are opened, the seats automatically swivel outward and are raised three inches to grant better access inside the cabin. 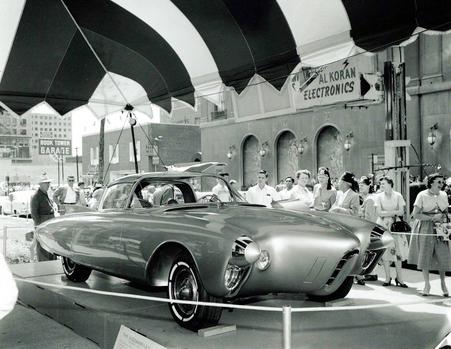 The custom wheels employed integral brake drums, and a pair of fuel tanks were housed in the rear fenders. 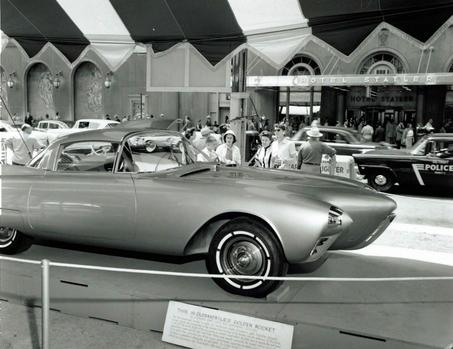 A little more than 200 inches long but less than 50 inches tall, the Rocket sported an impressively low silhouette, requiring some ingenuity in the packaging of the two-seat cabin. 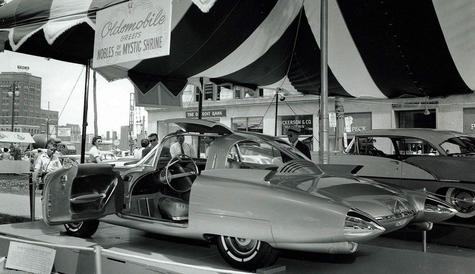 The speedometer was housed in the steering wheel hub. The lap belts and driver pedals display a strong aircraft influence. 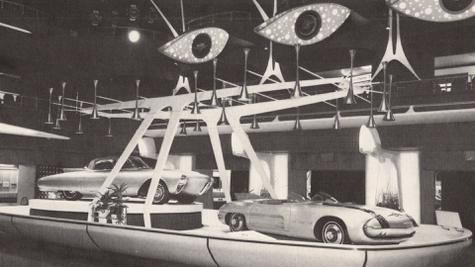 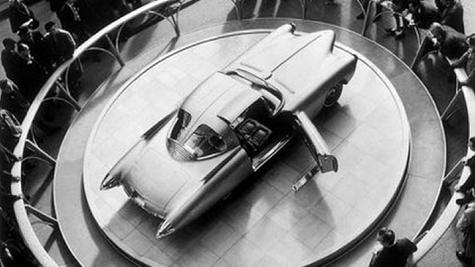 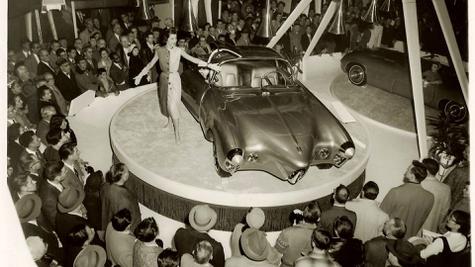 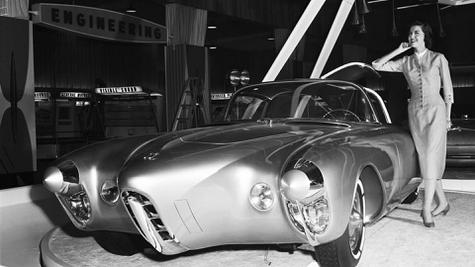 Current existence of Olds Golden Rocket seems doubtful. Though photos show it still existing as late as 1962, it’s been unseen since. 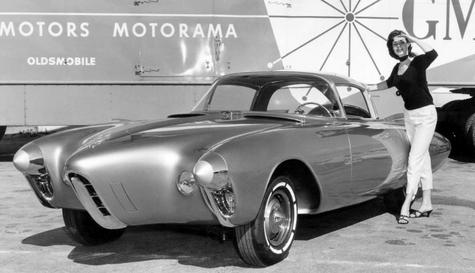 The car was revised many times and stayed on the show circuit for several years. 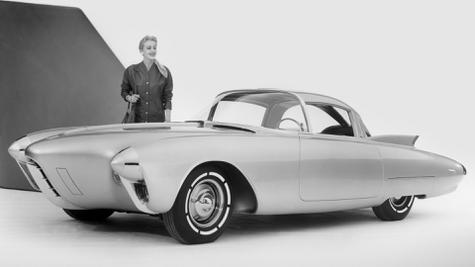 The Olds Golden Rocket had a very low and long profile. 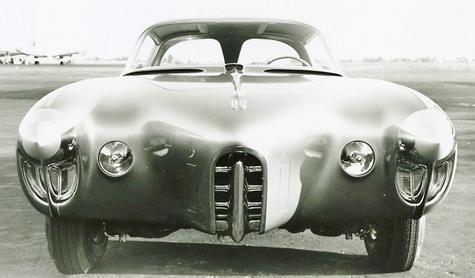 Only one prototype was built and designed by Harley Earl's Design Team.

The sweeping rear fenders give the car an overall rocket like appearance.

Transporting the Olds Golden Rocket to the 1956 GM Motorama. 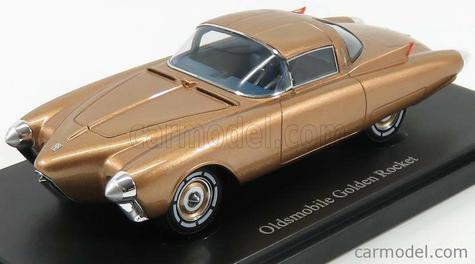 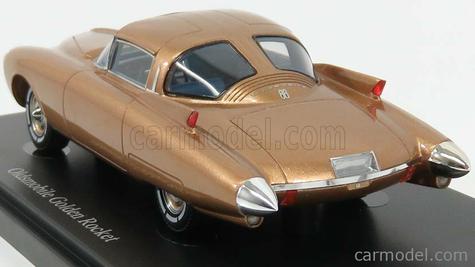 The car was powered by an upgraded 324 cubic inch Rocket V8 engine tuned to produce 275 hp. The car was 201 inches long, 75 inches wide and 49 inches high. It also had unique dotted-line whitewall tires.

Only one prototype was built and designed by Harley Earl's Design Team. Current existence of Olds Golden Rocket seems doubtful. Though photos show it still existing as late as 1962, it’s been unseen since. Enjoy! Mario.

One of the better looking bizarro creations and I see a hint of the 1960 Caddy fin and tail light. Cheers.

You have a keen eye George, there is definitely a hint of the future 1960 Cadillac fin and tail light there. Among several other future designs.

It amazes me how GM designers as well as other car manufacturers continuously used "Rocket" styling features in the mid to late fifties in their cars.

I remember in 1957 when the Sputnik satellite was launched by Russia and opened up a whole new "Rocket" era. Cheers!

My, my, my...looky what we have here. Hmmmmm, as others, I see the split window 63 Corvette. I'd be chastized if I didn't notice that. Good eye George and the caddy rear fender fins. You can never have too many fins. That is one thin steering wheel. And it was cool that the hatch would lift to allow easier access when the door was opened. The doted white walls were cool.

Thanks Rob you noticed a few items as well on this car. Funny you noticed the thin steering wheel. That was generated for the "Ladies with dainty hands to drive the new cars". That was the marketing ploy to buy a second car for the "Lady at home". The fifties ads for cars were loaded with that. As well as all the power options. Try saying that today! Cheers.