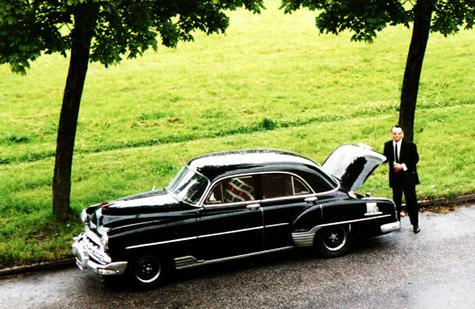 It's been six years since this mad suicide project began. I had just finished restoring my '52 Chevrolet Styleline and I intended not return to "The Dungeon" (our garage) for a long time. Oh no, I looked forward to drive the Chevy as much as possible first. But you know how it is.....

I shared garage with a guy named Chris, who owned the only 1952 Buick Roadmaster Riviera 76R in Sweden. It was a really cool car, and I liked to give a helping hand when Chris was working on it. Chris was also kind enough to lend me the car some times while my Chevy was disassembled. I started to like that green, lean, mean looking Buick more and more. 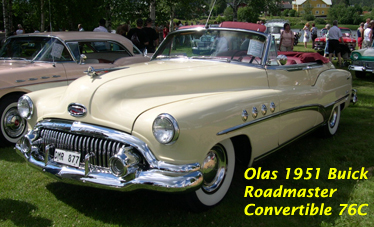 On the maiden ride with the Chevy I went to see my friend Ola who had been working on a new project car for some time. It turned out to be a '51 Buick Roadmaster Convertible. The '51 was in bad shape so to bring it back to life it needed lots of work. But what a car! I felt more and more how I started to fall in love with the “Roadmonster" family. And Ola noticed it too. 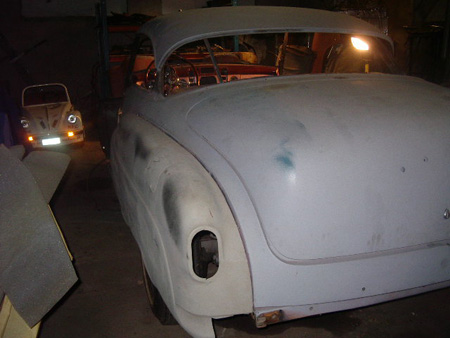 Later that day Ola wanted to show me something. Deep in a dark barn I saw something I couldn’t believe! It was another '52 Buick Roadmaster Riviera! So Chris wasn’t the only 76R owner in the country after all! -It’s for sale, said Ola. –And I think the price will be affordable. But I didn’t listen. He already had me at “It’s for sale”. 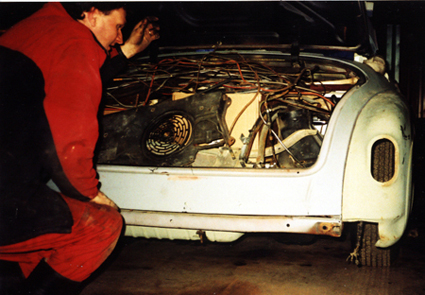 Yes, I know! I’m sick. Or so my other friends say anyhow. They also say things like this: -This heap is the ultimate hard- to-restore car! Or: - This model is very, very, very rare! And: - This beast will be mega expensive to restore! Just great! Not much support from them! But who cares? So we all sat down and I revealed all defects and bad things I knew of regarding the condition of this great automobile. I hoped it should get the guys to back off. And it almost did! 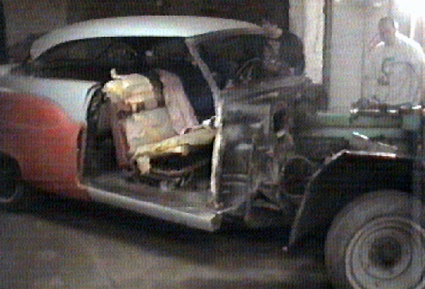 Well, OK, there was one more little thing I didn’t reveal. One small detail: “The car, or to be more correct: What’s left of it, has been used as a donor car to the ’51 Buick Convertible project, so most of the vital parts are missing. Well, actually most of the car is missing!”

The object of my love, a '52 Buick Roadmaster Riviera 76R, was hunted down by Ola and some local cowboy somewhere in the Midwest. After having bought additionally one '51 Roadmaster Riviera, the cars were shipped off to Sweden to serve as donor cars for the '51 Roadmaster Convertible. When I looked at “my” car for the first time there wasn’t very much left of it. The once so mighty ’52 Roadmaster wasn’t much more than an empty body on a rolling chassis. 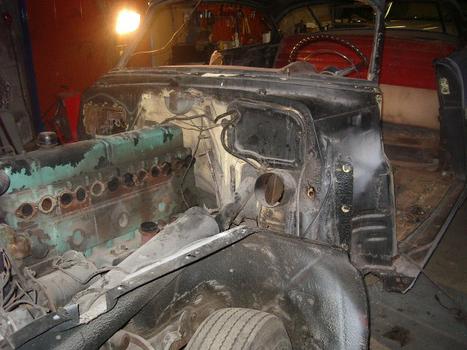 OK. So the car was a pile of shit, and my ’52 Chevy restoration had drained me on money anyway. So the car had to stay with Ola. My friends could breathe out at last. But deep inside I knew that some day I had to have this car!! 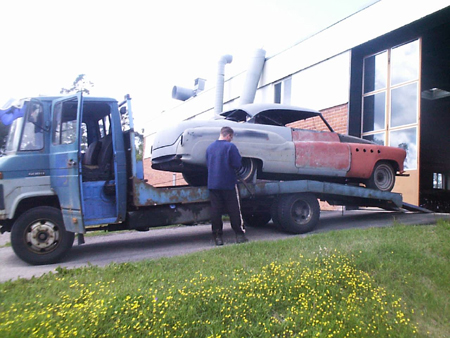 What happened next was weird. Chris couldn’t get over the fact that there were two owners of the rare Buick model 76R from 1952 in this country. So after some months he contacted Ola. And he happened to need some dough to pay for the new leather upholstery in his Convertible. The deal was done! The prestige was resurrected. So on a sunny day in April Chris and I went to pick up what once used to be a '52 Buick Roadmaster Riviera. 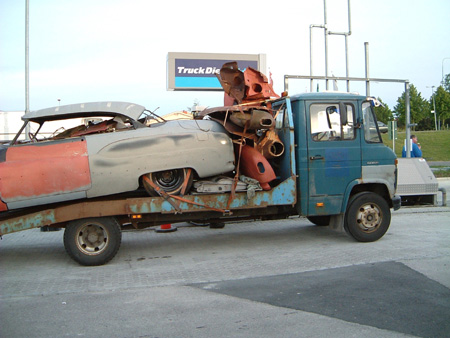 We were welcome to take all of the crappy parts from the Convertible and the other donor Buick. Two sets of rusty front fenders and two sets of rusty rear fenders. I really hope I can make four good fenders from eight bad. We got two hoods, four doors (two without outer door skin).An extra roof (!), a couple of naked seat frames, some parted out chrome parts without chrome, instrument clusters with smashed gages and rusted out housings. 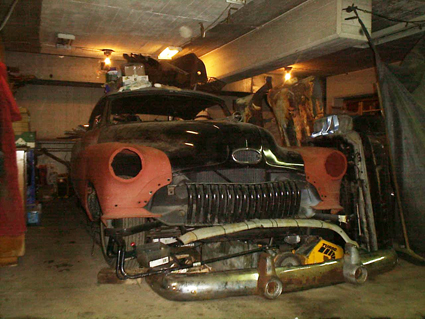 The upper grille bar had no chrome left, but lots of pitting marks! It was broken into four pieces, there were big chunks missing from it and it was also twisted! The only really nice part we got was the front bumper. It was in great shape and the chrome looked like it was new. We thought it was weird; it didn’t fit in with the other stuff at all! But we were happy and didn’t complain. 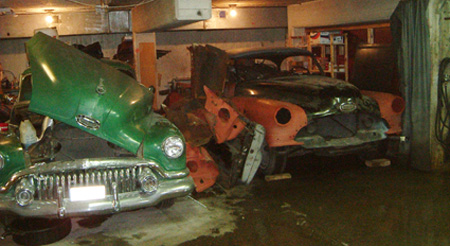 Much later we understood the bumper belonged to a Buick Special. The Roadmaster and Super models have much wider bodies than a Special, so the bumper didn’t fit at all. Surprise! I can go on like this for hours, but I think you got the picture by now. We dragged the corps home to our garage and closed the door. Chris was already full of regret over buying this car. To make him feel better I offered to buy the Buick if he should sell it some day. 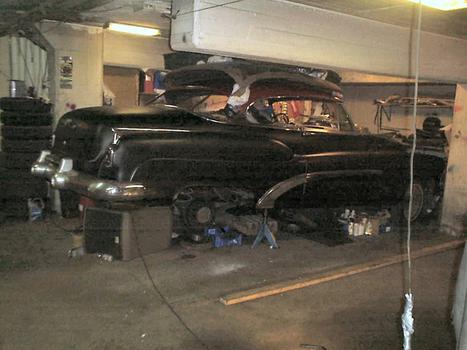 It only took a year until Chris offered me the Buick. He hadn’t even touched the car since we put it in the garage. Now he needed money to repair his house. And he could accept me as the owner of the second 1952 76R in the country. I didn’t have much money at this time either but I knew this was my only chance. So I managed to get my bank to loan me the money for buying my dream car. I think my arguments were almost true. The car is a classic, it’s almost in mint condition, and it’s a very good investment (HA HA HA). 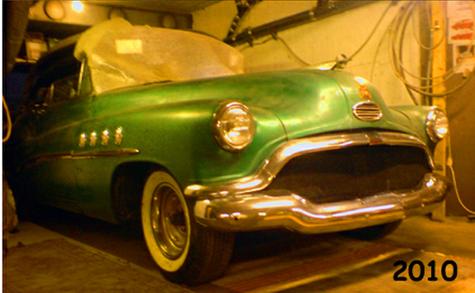 Hmm, OK. It was now time for the tricky part! How should I be able to hide this buy for the guys? And worse - How do I tell the good news to my girlfriend without getting beaten till death? So the time had come for me to do the only right thing! I went to my garage and I stayed there. If I’m able to get the Roadmaster ready during this winter I’ll maybe come out this summer. See you then.

What a great story. Thanks for posting it! Good luck on the restoration!

Oh my goodness, this is the craziest story I've ever heard! But you have the heart for this car, and I think you'll do great. I can't wait to hear the end of the story!

Great story, and brings back memories of my father's 2 door, fire engine red, 1952 Buick, with 3 speed manual transmission. I still have photos of it!. Good luck with, and looking forward to the restoration. jonjonaug@msn.com

Great story. I learned to drive on my dad's '58 Roadmaster 4-dr sedan. I loved that car! So did my high school girlfriend.

What determination!It reminds me of when I came home with my 58 Impala basket case.I'm still married,she was supportive after seeing how much fun it can be.

Yup.. whatever you can at the moment.. it all adds up!

Wonderful story!! Are you kidding! Livin my dream, you are. It will get there.. a little at a time.. and once done, the story becomes alll that much sweeter! Looking forward to seeing more!