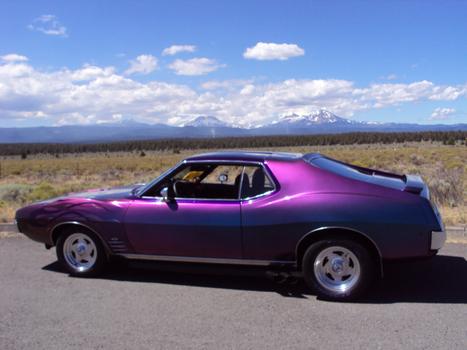 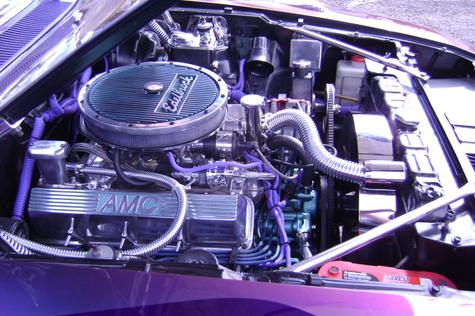 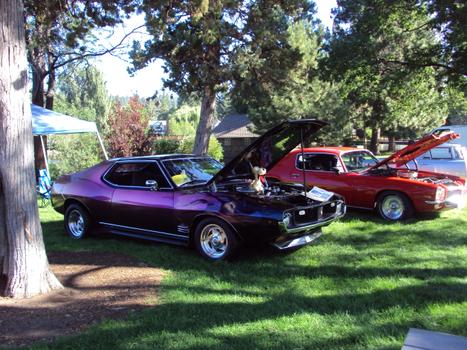 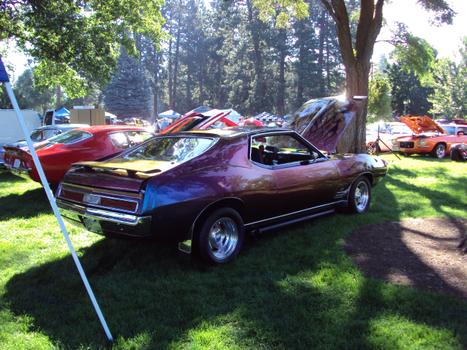 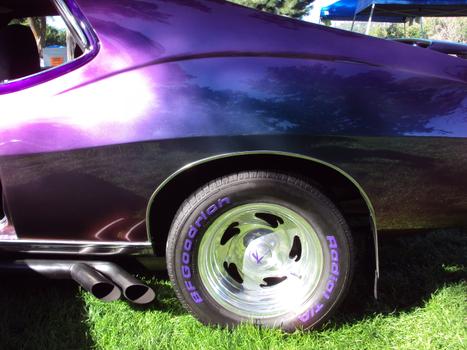 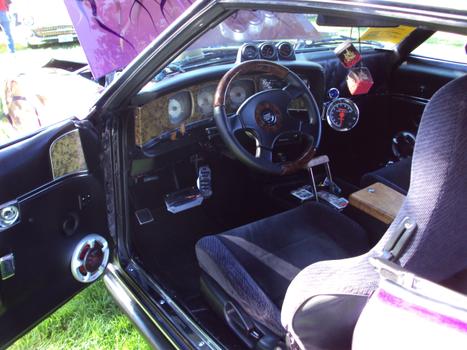 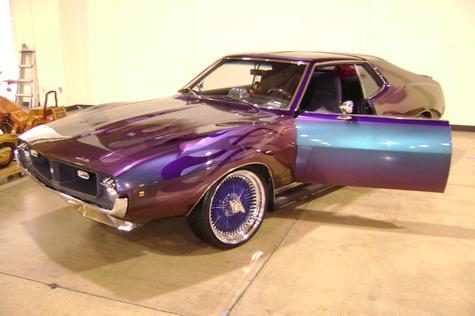 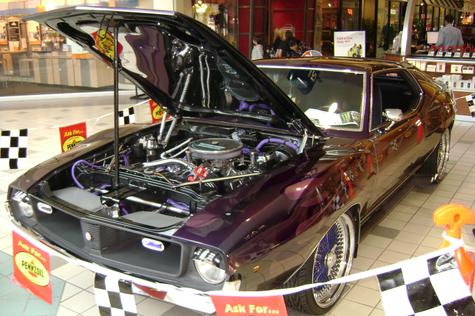 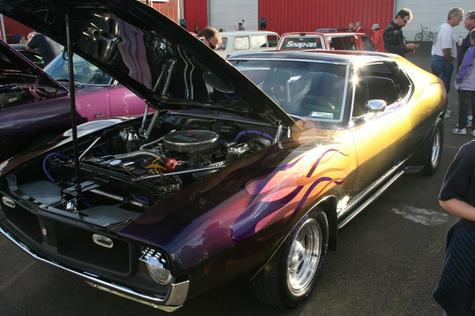 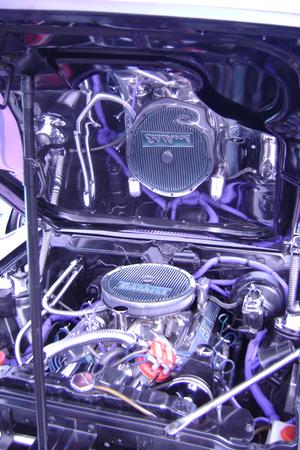 My name is Al Gaines and I live in Springfield, OR. I work as the Juvenile Justice Ministry Director with Lane County Youth For Christ and as Chaplain for the Lane County Juvenile Justice Center. I have dedicated my life to helping at-risk youth in our community. Fifteen years ago, I was given (as a donation) a '71 Javelin SST. I had the guy call me and he knew that I loved the car for many years that he was building for his son. He said that his son loved the car and drove it a short time and rolled it during a snow storm and all the bodywork was done and now his son wanted a 4x4 and the car is just sitting there outside of his home. He didn't want the car to sit there and rot so he offered to put insurance on it and let me drive it. It sounded great to me and I thought that it was a great looking car with a lot of potential. He asked if I could help him put the lights back in it and then I could take it. I told him that I would be over the next day. The next day he said that he didn't sleep very much the night before as God told him that the car was mine, so he just handed me the title and said that he had all the parts from another car that was bought for parts. That was really cool, what a gift! 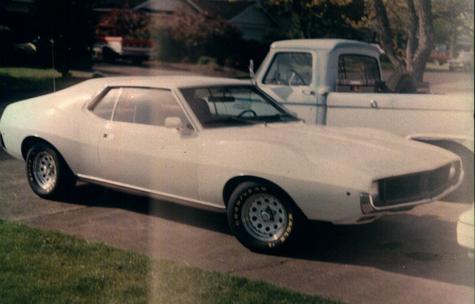 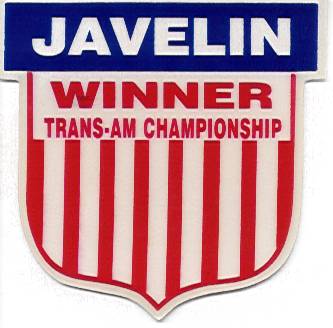 Here is an old picture of the original car from 1993.

I drove it for 5 years without doing anything to it. I fell in love with the body style and decided that this was too nice a car to see run into the ground. It had a 304/BW auto with white paint and red interior. I started by rebuilding the 304 with a nice cam, a cast iron intake and a 4 barrel carb. Then it was time to rebuild the tranny. I kept adding more and more chrome parts as I could only afford a little at a time. The Edelbrock intake and 600 cfm carb was next. Rebuilt the driveline and did a full brake job on the drum brakes. With the mechanical done, it was time to do the body work! The paint was shot and it had a lot of bondo, so I stripped the body to bare metal and started the 9 month task of straightening the body without the use of bondo. Well I did it and it came out great. The bodyman who helped me told me that my car was made for "extreme paint!" He said that I'll never see a car that has so many curves ever be made out of metal again and with all these curves, the extreme paint would go crazy! What an investment, it cost almost $3000 just for the paint products. It took 9 months work on the body to get it straight, at least two months of that was on the roof section. I chose Diamont Extreme Rainbow paint, it came out amazing, I had never seen anything like it anywhere. After all that work, I had the chrome bumpers re-chromed and all the stainless polished out. The car was amazing, a real head turner. 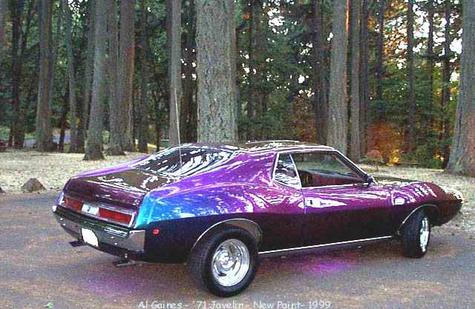 Well, it lasted 1 month on the road before the first accident, sitting at a light a big truck in front of me started rolling slowly back and came right over the front of me as I was honking my horn and screaming, NO, NO, NO!!! He cut two big holes right through the hood of the car and pinned me to the ground. The guy came back to see what he had done and when he looked he said "Why couldn't it have been a Pinto!". There was over $5,000 damage. After replacing the hood, we ended up painting the whole car again with ghost flames (my first time with flaming anything) and adding a wing spoiler in the back. Then, after being on the road for 6 more months and getting ready for the first car show of the season, I was sitting in a turn lane at a light again. I heard the sound of a four barrel kicking in and when I realized that it was a car coming fast and it was going to run the red light! I was pile driven head on by a 70 year old lady in an ugly Chevy Laguna (over $10,000 damage to the car and about $100,000 damage to me!). She hit me in the front left corner at about 50-55 mph after hitting a Ford 4x4 pickup, which bent the frame over and shoved the steering wheel into my chest. Her car spun me around and another car hit me on the other side. The guy in the 4x4 was knocked out and ran into 3 other cars, he died later that day. I took the money that the insurance gave me and got the most from doing a lot of the work myself. I used up every resource I had kept track of from other parts cars. I just keep on putting the money back into the car and now it's been 4 accidents (all State Farm Insurance) and over $22,000 insurance money re-invested back into the car with a lot of the work done by me to be able to do more. 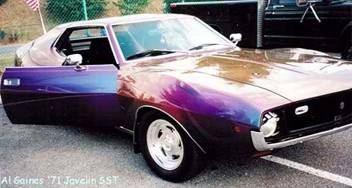 Since 1999, I won almost 30 Trophies in the first three years and much of that time it was in the body shop.

In the winter of 2003 and I started building a 401 while my transmission guy was rebuilding a torqueflite to go behind it. I got one of the new Edelbrock RPM Air Gap intakes and had it polished out, and yes I know that I could've bought it polished, but I saved money and it looks great! I went with 30 over forged pistons (so I can run NOS), a nice Crower Cam and lifters, roller rockers for the ported and polished heads, and it's all balanced and I'm down to getting the Chrysler valves and some big springs and I hope to have it in this winter. I don't think that I will ever finish this car, I've got about $35 -$40,000 in it and I keep thinking of more things to do. I pulled the whole re-upholstered interior I had and replaced the whole interior out of a Honda Prelude, now I have real bucket seats. I dropped the exhaust system and installed side pipes, added a lot of lights, neon’s, strobes, and had more pieces in the engine compartment chromed. My tires kept rubbing in the back so I put in air shocks. Finally, I replaced all the front end parts and pulled the drums off the front and got some disk brakes to get this bad boy stopped! After pulling the built 304 and rebuilt BW auto and replacing it with the 401 and a torqueflite transmission, the next thing will be a positraction rear end. Right now I'm running 265-50-15's on the rear and 215-60-15's on the fronts. I don't think that will give me enough traction. In 2006 I just repainted 3/4 of the car again after repairing several places in the body that were bubbling up under the paint. I spent so much trying anything and everything to make that rust go away and I am very convinced that the only way to fix rust is to cut it out and weld in some new metal. My quarter panels were so packed out underneath the panel and the metal always looked clean on the outside but there were tiny microscopic holes that would let out water and bubble the paint. When you are painting with Diamont Extreme Rainbow paint that runs $540 a pint wholesale, you have to fix it right. After cutting and buffing out the car, I had a couple days until the next show so I decided that it was a good time

to put in the power windows and power door locks. It seemed simple enough, but I was wrong! Its great having them work after all of the work to put them in! When I start the car, the doors lock automatically and when I press the alarm button, the doors lock. It's cool! In 2007, I decided it had been too long since I changed the cars look so I decided to go with another color, BASF R-M Carizzma Lavender Candy Paint, inside the tee-top body lines on the roof, across the top of the doors and across the vents under the windshield and around the back window. With all the work being done on the car I removed the door handles and installed solenoid controlled door openers and door poppers and hooked them to my remote alarm system. Then I added another set of flames to the front with the candy because I wanted the car to look like it had always been painted that way, not just an add-on. I pulled the engine again and re-painted the engine compartment and rewired the front end of the car. When I pulled the engine I noticed that my exhaust manifolds were cracked, so I decided to install a set of Hedman Hedders and had some 3” custom side pipes made and it sounds and looks great. I then pulled the dash and did a flame job in part of the dash with some dense foam and covered the dash and door panels with black leather, added a big tachometer and a few more gauges. By 2007,I had won 48 trophies with the car so far and it’ll be interesting how many trophies I can win over the big 3 car makers. 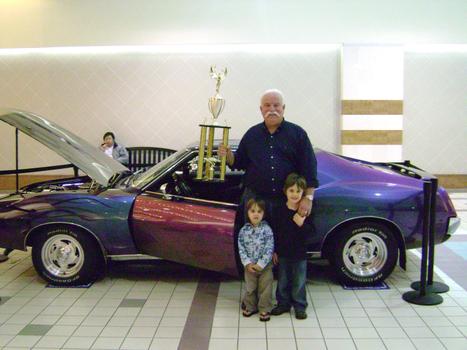 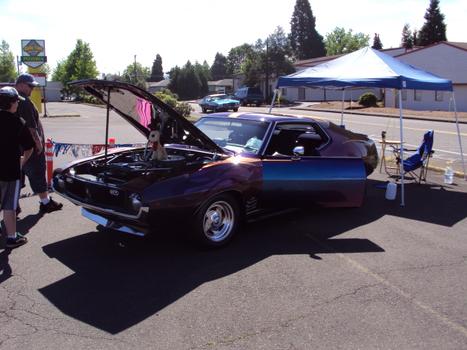 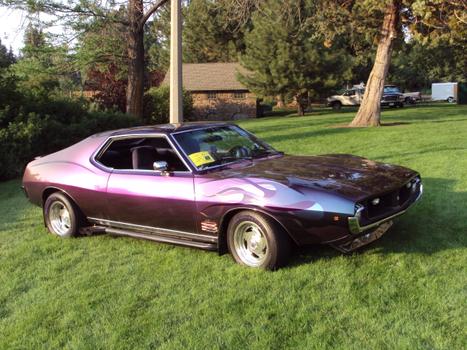 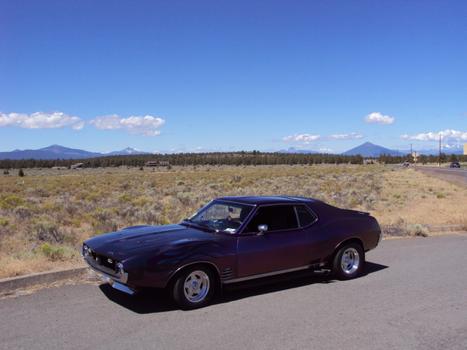 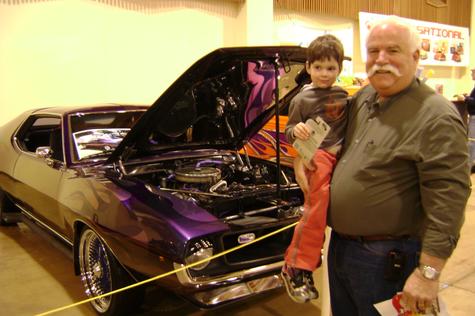 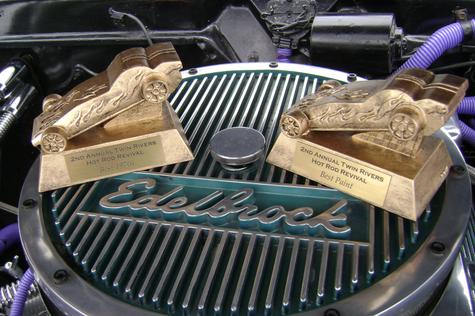 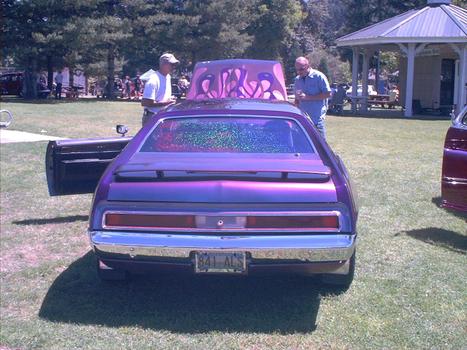 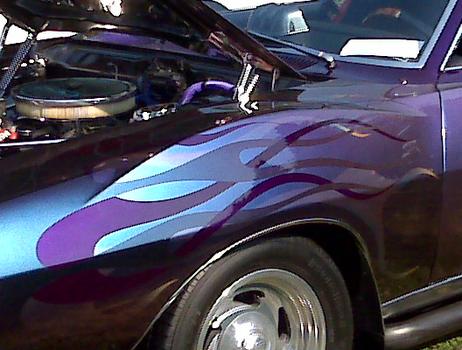 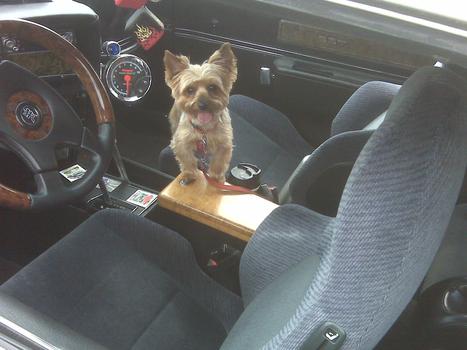 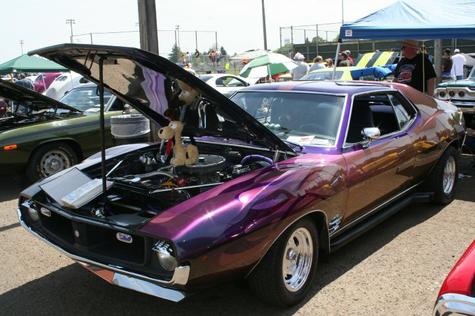 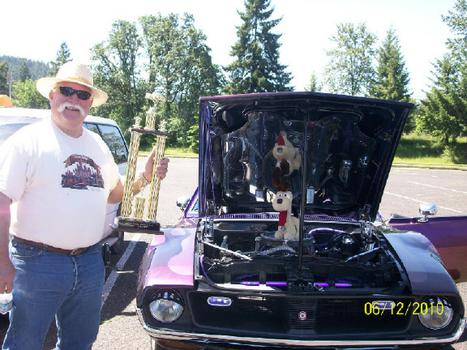 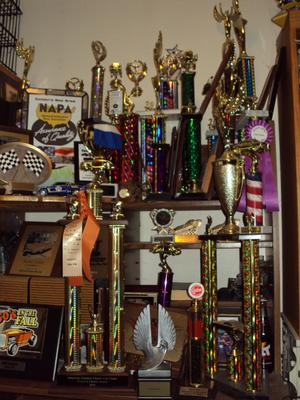 Now that it's 2011, I have won 61 trophies. Just got done re-covering my uphostery and it's beautiful with burgundy snake skin centers on the seats and black ostich skin on the outer parts of the seats. I'm redoing the woodwork and going to a redish stain to enhance the seats. I custom made a new air cleaner out of 4" aluminum tubing and will put up new pics as soon as the sun comes out and I start this new season of carshows and cruises. I'll probably never be done with this car as I've been working on it for almost 19 years, it's just evolving. May God bless you and yours and hope you can find a gr8 car to build on and enjoy. I now have 10 grandkids and it'll be fantastic building and teaching them about cars for them. Thanks.

Looks great! I had a'71 SST,401,auto,A/C that at the time money was tight & I added Dodge Aspen R/T wheel flair things that were behind the front wheels & in front & behind the rear wheels(i just had to reverse them to fit better)then molded them in. Then took a Ford Escort GT front bumper & cut it up & mounted it under the Javelin bumper & it went back to the wheel opening, so it made a real nice looking air dam. I painted the car a custom mixed teal green. I wanted to make a high wing just high enough to clear the trunk lid when open but sold the car.

Thanks Freerider, I wish i held onto some of the other cars I had, let them go so cheap, worth a fortune now, of course!