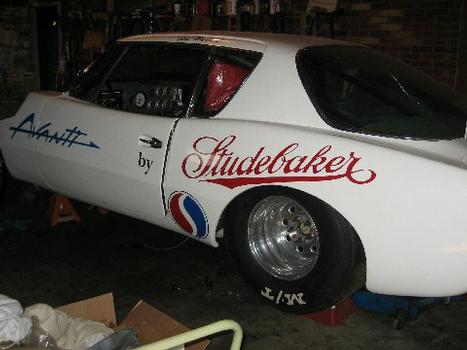 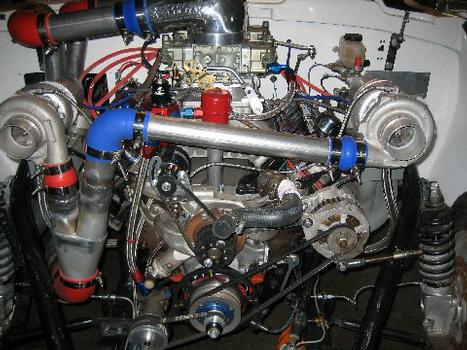 This is a 289 Studebaker V8 that is being built. It is basically the same as the '51 Chicken Hawk engine except has home made headers, dual Holley 600 cfm carburetors on alcohol and a liquid to air intercooler. The car should be about 500 pounds lighter than the Chicken Hawk.

I would like to recognize some friends that helped a great deal in building this Avanti. Dave Closser, a friend and racing buddy I've known over 50 years spent many hours with me working on the car. His long time friend and now mine also, Ron Painter was also instrumental in helping doing mainly all the welding that was done.

When Ron would go to Florida during the winter, Dave took over the welding as well as designing and making many of the parts such as the geometry for the dual Holley accelerator linkage, belt driven fuel pump mounting, crank trigger ignition, turbo intercooler piping, etc.

Dave and Ron cut away the stock front suspension and mounted the strut front end.

Dave has a four wheel drive pulling truck that he built along with Ron's help that puts out 1300 hp. They have successfully campaigned the truck several years traveling all over the country and into Canada.

Joe Sturbois, a senior in high school my first year of teaching, was the electrical engineer for the Avanti sorting out the J&S Timing Retard, the HI 8 Crane ignition system, etc., and a general go to guy to help sort out problems.

Bob Belling in Columbia, Connecticut, did the painting and lettering and did a great job of straightening out the botched front clip.

Any success the car may have in the future would not be possible without these friends help and knowledge.

The Avanti has R 3 valves in the heads and an adapter plate to mount a Mopar 360 tunnel ram intake under the dual Holley alcohol carbs. The transmission will be a Powerglide with Ford 9" rear with 3.89 gears and four link rear suspension.

Will try to add more pictures and info once the car is on the track.

I was lucky enough to hear this car run and see it up close. It’s a work of art thanks every one who worked on it. Sounds strong and I can’t wait to see it on the track. Richard

The thing looks AWESOME. Can't wait to see it finished.