It all started as a joke... 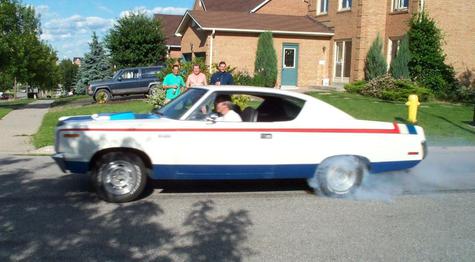 My first muscle car was a Rebel Machine, so was my second, third and fourth. This shot was me doing a burnout in Rebel #3 with my neighbours watching from my front lawn.

I believe I'm the only street racer to have retired from the sport and have that retirement covered by a full page story and photos in a national newspaper (Globe and Mail). 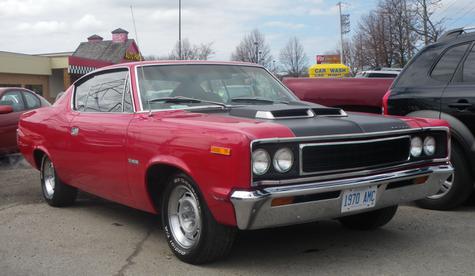 This is the Machine that traveled behind the Iron Curtain. I first spotted it out of the corner of my eye parked on a side street in Winnipeg, Manitoba in 1979. So I stopped and met the owner, Marco and we compared Machines. At the time his was in better shape than mine and completely solid.

It was bought by Gerard who became a friend of mine because of the car. He subsequently traded it for an Ambassador after he realized he'd never be able to repair the salt damage he'd subjected it to. It went through 3 more owners before I traded my #3 car for it. This one's an automatic with an experimental 1969 401 in it. It had been donated to a school and never used in a car until it came to me. Since it's a 401 casting, this car has a Chrysler 727 transmission in it. 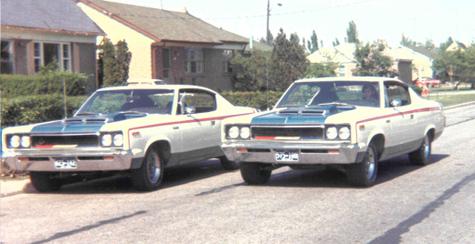 When your best friend has the exact same car you do, strange things can happen and did. It's hard to imagine a car having such an impact on a person's life but mine certainly did and still does. Both of these cars still exist.

Only 2,326 Rebel Machines were produced (documented with AMC paperwork).

About half were Red White and Blue as shown. The rest were one of 16 solid colours with a flat black hood and functional Ram Air hood scoop with integrated tachometer in the scoop. While the scoop may have looked boxy, it worked way better than most other hood scoops of the era.

THE MACHINE was the only Muscle car that handled like a modern car of today due to the heavy duty suspension, 4 piston disc brakes and a perfectly balanced weight distribution.

Other cars have to be updated when restored to compare with what came standard on all Rebel Machines so they don't handle like landing barges and stop like ocean liners. That's what's so fictional about the General Lee. There's simply nothing that can be done with those cars to make them handle like a normal Machine because of the weight of the motors.

So it's been pretty irritating all these years watching other Muscle cars getting so much attention, not to mention the money it takes to make them handle.

People who have been fans of other makes are invariably astonished when they finally get to try out an AMC.

That's not to say I don't appreciate other cars. I certainly do. But having tried most of them, I've never had reason to switch.

So if you're a modern giant and want an old car, buy a Ford. Their designers thought everyone was at least 6'-6" tall with arms as long as a gorilla's. This is a shot of the 1971 Matador Machine - one two surviving. The Rebel name was discarded for the 1971 model year in favour of Matador for no useful reason I've heard and it didn't do AMC any good.

The Rebel Machine was reduced to a "MACHINE" option and two motors were available - a 360 and a 401. No special cam. But there never was one anyway. The Rebel Machine got it's extra power from free-flowing heads and exhaust system as well as a MACHINE intake. So they still got pretty good gas milage. The specs said 14 hwy but mine got 20. On the other hand, Imperial gallons are larger than US gallons. So you go farther on a gallon of gas in Canada.

Anyway, 42 Matador Machines were made. The Sonic Silver one above was changed to Matador Red by Brad Denning who owned his own body shop. He figured he could always change it back to Sonic Silver if he had a buyer who demanded it.

As it turned out, he sold it in its red form.

The other Matador Machine is one of the blues last I heard.

Another thing that happened for 1971 is that the method of recording horsepower changed. Before 1971 horsepower was recorded at the flywheel with no accessories running. In 1971 the readings were taken at the rear wheels.

So in 1971, all the cars seemed to have a drop in horsepower and no amount of explaining in the press made an impression on the car buying public. Everyone other than mechanics thought they were getting an under performing vehicle for their hard earned dollar and sales dropped - especially for muscle cars that were already being hammered by the insurance industry.

But the Matador Machine came in at 330 horsepower for the 401 and that wasn't enough horsepower for it to be considered a muscle car by anyone. However THE MACHINE only had 340 horsepower and it only qualified for the high performance designation by one single horsepower.

But the sneaky thing was, the Matador Machine was actually the more powerful of the two cars. If the Rebel Machine had been measured the same way the Matador was, the 340 horsepower reading would have dropped lower than 340.

Not to worry though race fans, the important thing in drag racing is torque and Rebel Machines had that in spades at 430 foot/pounds. More than most other cars of that era.

The other problem the Matador Machine had was a lack of an exciting graphics package. They were all boring sleepers and completely unrecognizable to nearly everyone except the police in California who had them and surprised the hell out of street racers who discovered they couldn't out run them in their Fords, GMs and Chryslers. And if they had to turn a corner, they were done like dinner.

In those days, muscle cars were and generally still are geared for maximum power of the line. The top ends were largely ignored because at high speeds, the engines were hitting the red lines and couldn't be kept at those revs without grenading the mill.

If you've ever blown an engine, clutch or transmission, you know that is something to be avoided. Especially since clutch and transmission explosions can be fatal.

So as much as AMC products are still parodied in the media, the reality of owning one was generally a completely different experience.

Mechanics and other mechanically inclined people enjoy them because they're so easy to work on. For instance in a GM, you have to remove the front clip to get at it. In an AMC it's a few bolts and a housing re and re.

The technology was why Chrysler bought AMC. Without it, they'd have gone under. Today, AMC technology and techniques are still major drivers in the auto sector. 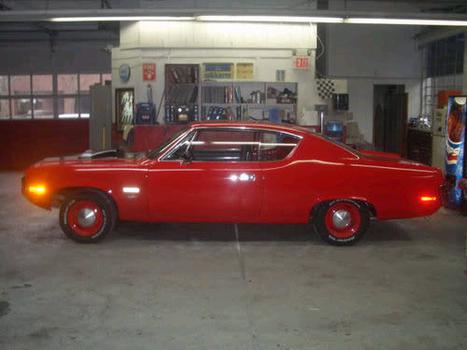 The Matador Machine as it was the last time I heard of it. Even the red colour doesn't overcome the sleeper look. Back in the day that was a good thing. You didn't want undue notice from law enforcement. But today street racing, one of the safest sports ever devised by man is frowned upon. So people who own powerful cars want them to look powerful as well as be powerful. Because today only the paint, the graphics, hood scoop and wheels tell the viewer that this is a vehicle to be reckoned with. The hood scoop on this car doesn't belong there. It's off a Rebel Machine. But it does look good when you see it.

Always loved the Rebel Machine. I even had the model car as a kid in white with the patriotic stripes. Would be happy to make room for one in my All-Mopar garage.

The Rebel Machine car model is possibly the most expensive to buy nowadays if you can find anyone who would part with one. There could be old hobby shops that still have the odd one.

Wondering if you have any information regarding the 1971 Matador you featured in this article. The silver one that you stated there were only one of two surviving. I noticed the license plate--Wisconsin. My father had that exact same car. That's where we are from. Wondering if it's his. Anyway there is a way to research that car?

Apparently there are three Matador Machines in existence. The Internet unearthed another one some time ago. The other two are both 360s. The best way to find them is by scouring the intenet using the images option in google.