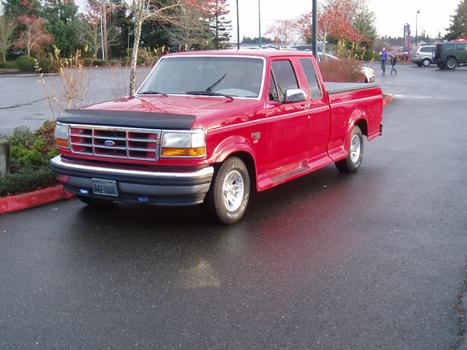 This is kind of a strange story about this truck. My brother Terry went into Berg Ford in Phoenix Az. to buy a stripped down 1996 Ford truck. The salesman then told him that for the money he could buy this 1995 truck...Seems as though a man came in put together a deal on this 1995. then wanted many extra's added to it ..Like having the engine removed and having it sent out to be blueprinted and balanced. Then adding the fairing and wood in the cabin. he paid a bunch extra for everything only he never came back for it. So they still had title to it because he owed a balance on it. Try as they may they couldn't find the guy. So that's how my brother got it. Well a few years later my brother retires and wants to go RVing so I get a call one day do we want to buy it? My Wife Jeanine say sure. So she bought it. I flew down and drove it home about 10 years ago. I like driving it too

It's great when there's a story that goes along with the vehicle........looks nice and straight too