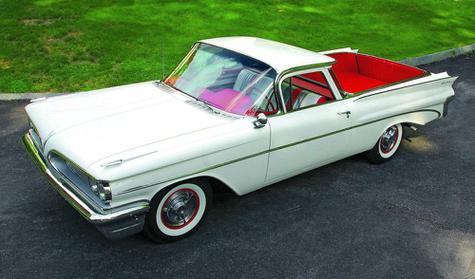 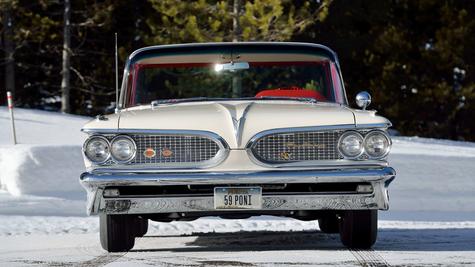 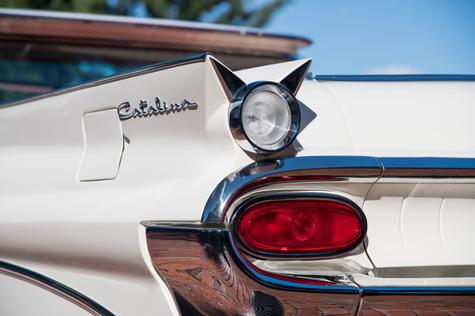 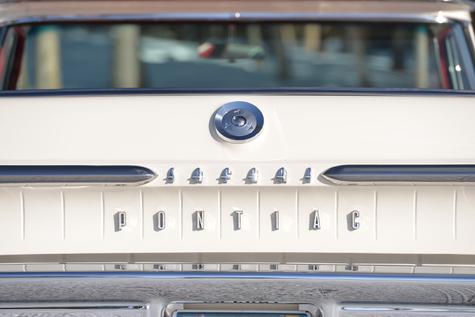 It was originally built from a 1959 Pontiac Catalina Safari Station Wagon and a 1959 Chevy El Camino. 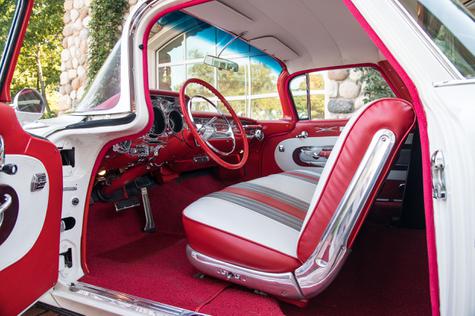 Interior is from a 1959 Pontiac Bonneville. 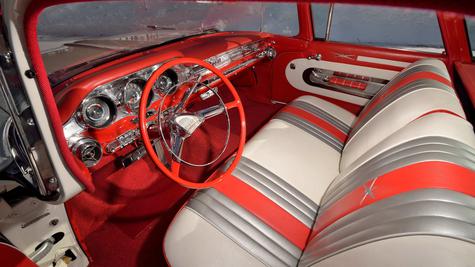 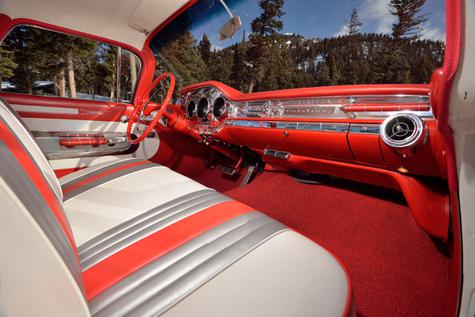 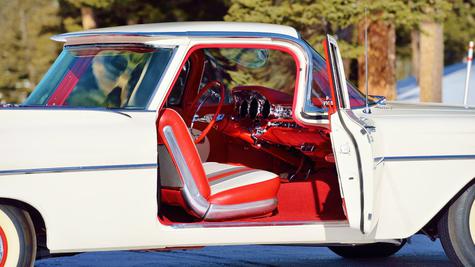 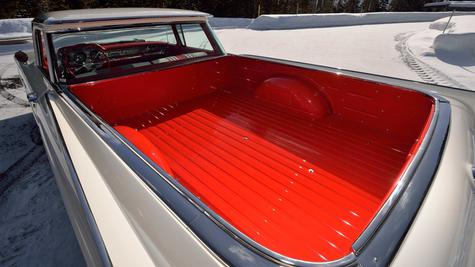 This is a Chevy El Camino pickup truck bed. 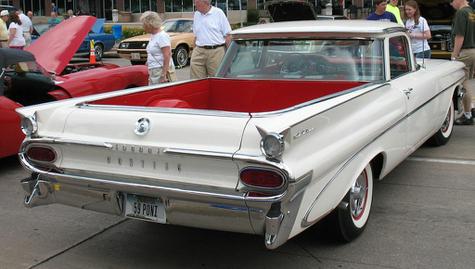 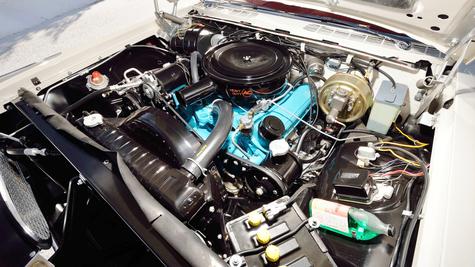 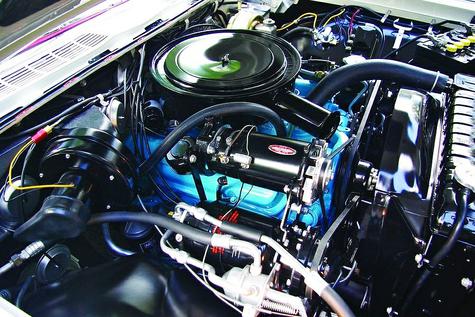 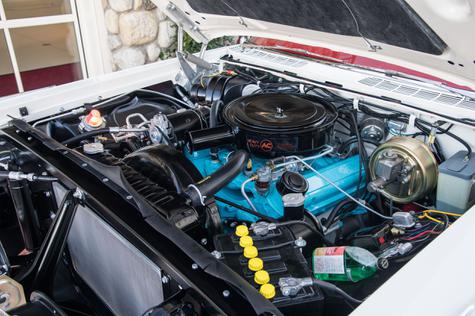 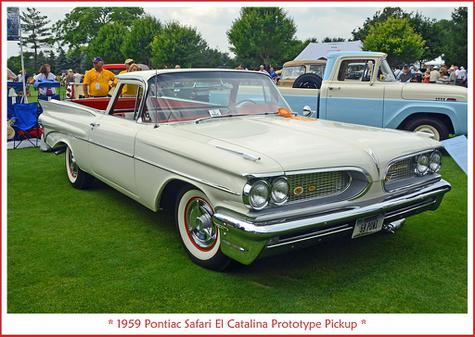 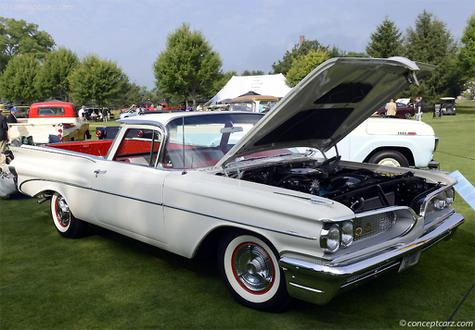 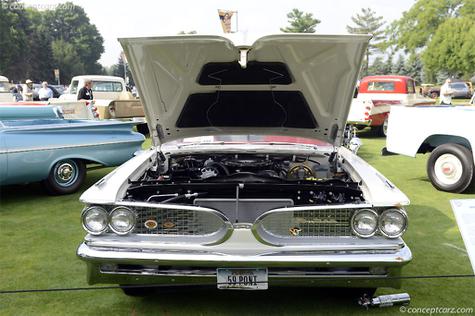 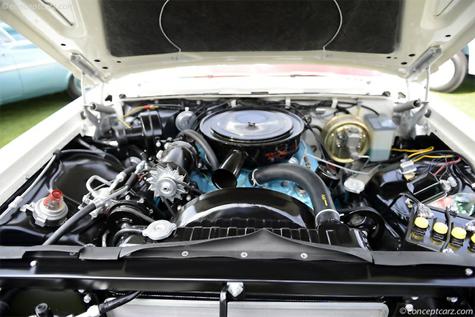 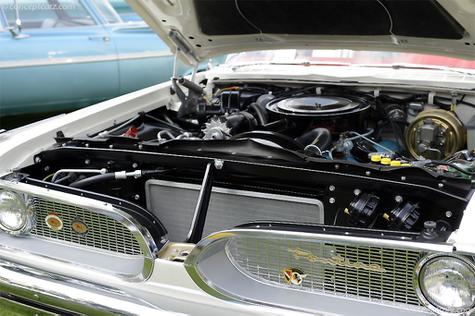 
1959 Pontiac Car of the Year Commercial

The only 1959 Pontiac El Catalina prototype built by GM’s Bunkie Knudsen. It was originally built from a 1959 Pontiac Catalina Safari Station Wagon and a Chevy El Camino.

While the Ford Ranchero and Chevy El Camino proved to be successful niche offerings, GM resolved to leave Pontiac out of the mix, determining the small overall market was fully saturated with two competitors.

Interesting how the announcer does not even know the proper year of this one off vehicle or what motor is actually in it. Does anyone actually know for sure that this is an actual 1959 Pontiac proto type. It just seems very odd to me why GM would ever authorize such a vehicle. Chevy was in that very small market against Ford, so why throw Pontiac into the mix. It makes no sense and for that reason, I do not believe this car is real. I think it was made up by someone and granted it is a very beautiful job and she is a real beauty though. Cheers.

The "announcer" unfortunately is from a Car Museum from Hershey PA where the El Catalina was on loan for display. He obviously got the year wrong on the car as well as the engine size. Not much of an interested or knowledgeable "car person". Big mistake there.

But doing a lot of research I found the car has been on the Mecum auction block (verified to be authentic) as well as Hagerty. Many articles are written on it's authenticity. It appears to be a real prototype project back in 1959 with Semon Bunkie Knudson at the helm. That was the same year the 1959 Pink Pontiac Catalina convertible was produced (only one made) by Harley Earl for his wife since he was retiring. He was the GM designer who invented the "fin" used on the 1948 Cadillac. Coincidentally Harley Earl died today on April 10, 1969 at the age of 75.

Bunkie Knudson then Gen Mgr of Pontiac teamed up with John DeLorean who he grabbed from Packard and turned Pontiac Div around from the stale company Bunkie's father had created. The "younger" blood went on to develop the GTO and made Pontiac a young person's car. Bunkie knew about the Ford and Chevy car pickup truck and wanted to test the waters with his own version but there was too much competition and not enough demand, so the project was scrapped. There were actually 2 protos made but only 1 survived. The 2nd car was used for parts.

I hope I didn't bore you with all this but as I said I've done my research. Cheers.

As the guy who just shot is prized steer said:

I didn't even know this existed. Of course there's a lot of things that escape me.

I can now forward this to my Indian Head buddies and see if they knew of it.

Great story. Yes too bad they get some of the most ill informed talkign heads to try to act like they know what they are talking about.

It's sort of like Congress......and never admit you are wrong.

Great post Mario....nice way to wake up on a Saturday morning. I'm smarter today than yesterday. It is Saturday right?

Yes Rob it's Saturday. Thank you for the always entertaining post! Regards, Mario

Mario, you could never bore us with your very insightful and interesting old car musings. Thank you for the clarification on the 59 Pontiac proto type. As much as I like the look of it, I would take a 59 Chevy real version any day of the year over it. Cheers.

Thank you George. Glad I didn't bore you, there's always so much to say. I too like the 1959 El Camino. What a beauty that car/pickup is. Love seeing them at car shows. Cheers!