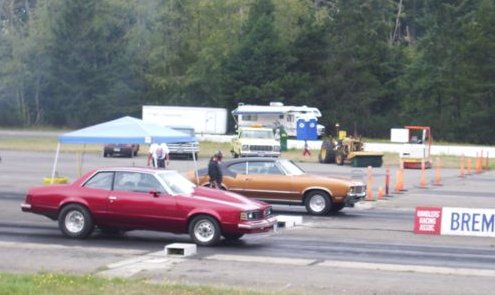 Car is a 1981 Lemans that weighs 3800 lbs with driver and half tank of gas. Has full interior (including back seat so I can put the 3 car seats in for my kids) with power windows, power steering, power door locks and 4-wheel power disc brakes.

The mph indicates there is more in this combo. I need to work on improving the 60 ft times. The car usually only 60 ft's in the 1.61-1.68 range. That's with or without nitrous.

The car is an animal on the street, but is an absolute blast to drive. I love to see the look on people's faces when I am in 3rd gear at 55-60 mph and stomp on it and the rear tires just go up in smoke. I usually drive to the track, swap the street tires for the slicks, rip off some 10.80's to 10.70's (motor only, no power adders) swap tires again and drive home (you should see the look on people's faces when I drive down with my wife and kids, haul out the car seats and then do this.) Most people can't believe this is a pump gas consistently street driven car and they really have a hard time when I tell them it's a Pontiac motor.

Some changes were done to the car for 2008. All the changes were made in the suspension. This was done by a friend of mine, Joe Sye, who has also been handling most of the driving chores at the track this year. Anyways, first time out at the track this year with the suspension changes and the car goes 10.60 flat. Yahoo! The best time for the car, on the motor only, this year, has been 10.52 and with a 150 shot, it has now done a wheelie popping 9.81 at 137 mph. We feel that the car has 10.40's in it with the current motor(see engine specs) and low 9.70's with a 150 shot with the current engine. Plans are to install a Pontiac pump gas 541 making 750+ hp in the car in the not to distant future to see if we can get the car to run 9's on the motor only.

You are a maniac ! LOL Good job

Cool lemans. I hope mine turns out as nice. I will be running a 400 out of a 76 GP with a 200-r4 in my 1981 lemans. I fully agree with the rear seat and full interior. I have a bench seat with culumm shift and it will stay that way.

Was in Bremerton for a family reunion in 2008. My son and I snuck out to watch for an hour. Saw your car; talked to you and heard it run a little. Sorry we couldn't stay to watch it run. Looks like a ball. Thanks L David in Maui

Awesome, truly absolutely AWESOME! Working on an '86 Mazda B2000 truck with the same ambitions. Building a 383 with AFR 220 heads and 630 lift & 282/292 duration solid roller cam that hopefully get me in the same ballpark as you. Provided that I can get it to hook up...

WoW! That's awesome! Just joined and yours is the first car I homed in on.. I'm gonna get lost in this place!! :)

Nice car. I have 83 Malibu Wagon(as you can see if you look) Worked on read end. There is hope. You can see by the pix and I'm sure you've noticed on TV or at the track that G bodies can hook on smaller tires. Consider notching the frame you can get a little larger tire.Next time I get my car on a hoist Ill take some pix to share. My suspension guy, Jimmer Kline, Grand Rapids, Michigan suggested and installed a form of a sway bar(or anti-roll bar) that settled my problems

Outstanding Pontiac all the way.