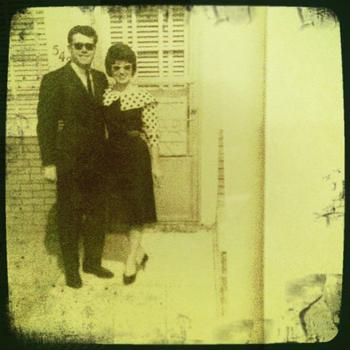 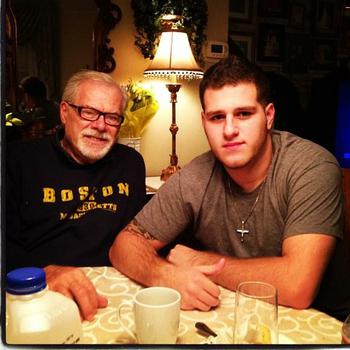 ~ Me and my Grandson Eric who is teaching me how to use my new Camera that he helped me to buy in "Best Buy " just yesterday on Sunday January 29, 2017 ~ 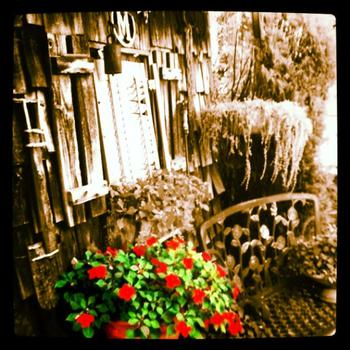 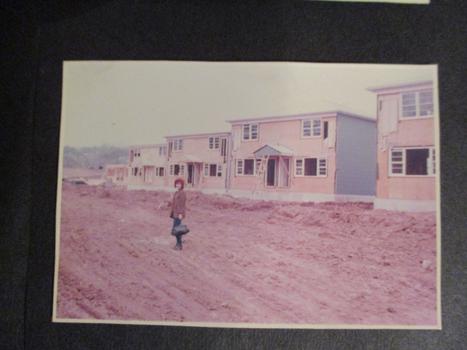 ~ First Home for us with Elizabeth standing there while I took the photo on Tysens Lane, Staten Island being built back in '64 ~ 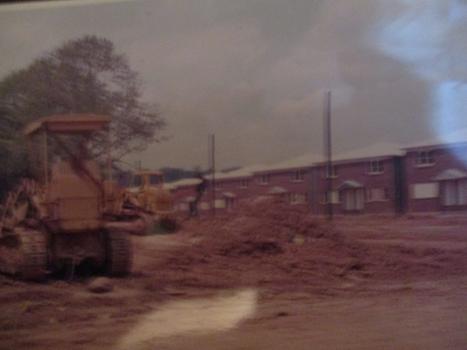 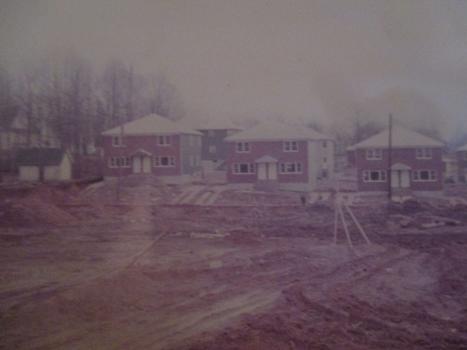 I believe that this photo was taken from our upstairs back yard bedroom window and is a view of Cranford Ave where my good friend John, Roseann and his family lived ~ Notice that Ray Celano's home was not started yet and would cost another $1000 more back in those days of low cost homes ~ That street would eventually be called Hitchcock Ave ~ 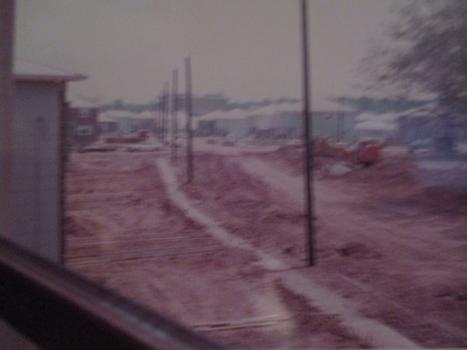 My '57 Plymouth (model of my car) that was used to take Lee, Liz, Mike and myself up to Connecticut on one of my first dates with Liz ~ Than we continued to use it when we lived in Staten Island on Tysens Lane and this link will take one to that quicksand story ~ http://www.americantorque.com/page/0/2399/ 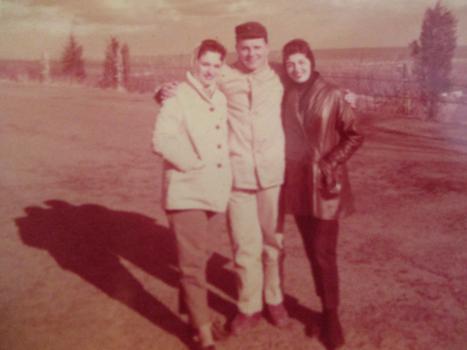 ~ ' 59 photo of Lee Delgado who introduced Elizabeth to me, Mike Lukow one of my coworkers at MetLife and my wife Elizabeth up in Connecticut where we went for a drive in my '57 Plymouth ~ 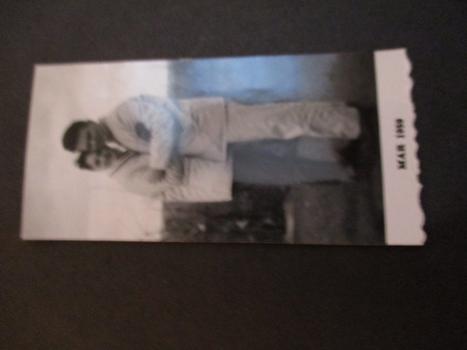 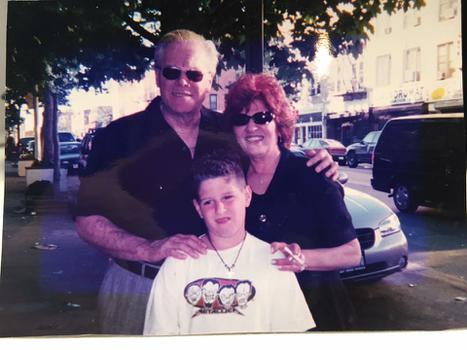 ~ A photo of Nick, Elizabeth and Eric ~ 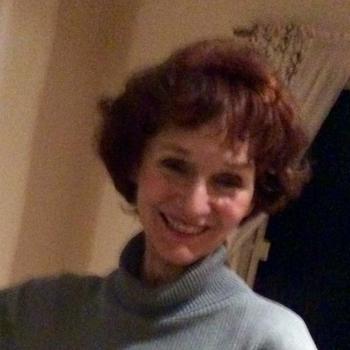 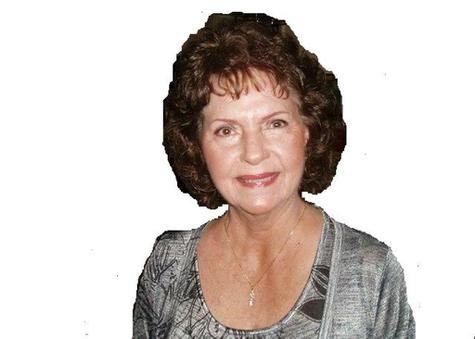 My wife Elizabeth and I had been looking out in Long Island for a new home but the Property Taxes were too high so we both decided that there was no harm in taking a look-see in Staten Island that was about to become a major new growing part of the city as a bridge called the Verrazano Bridge was going to be built soon ~ We were living in Sunnyside, Queens for two years and the lease on the apartment was coming up in another year and that was constantly on my mind ~

After taking a dry run from Sunnyside on the Brooklyn Queens Expressway to see how far and long it would take us to get to the Brooklyn side of Staten Island where the bridge was going to be built, this idea of buying a new home in Staten Island was becoming more than just a dream ~ On many occasions we took the Staten Island Ferry that at that time would also accept automobiles to get onto the Island ~ John Rap who I had met at work continued to talk to me about moving not only to Staten Island but also to his new neighborhood of New Dorp too ~

One day while riding on the subway from Sunnyside to my Manhattan job it dawned on me that why not buy this home on Staten Island because the worst thing that could happen would be that either I could not afford the mortgage or I could not afford the rent on the apartment if I suddenly were to lose my job so what difference would it make.!!! Now all I had to do was talk my new young bride who was 6 years younger than me and was really not yet ready to buy a new home with the responsibilities that goes with it ~ At first she was slightly hesitant in making such a drastic move because of her age as she was comfortable living in the same building that her Uncle Gus and Aunt Grace also ( Chapter 20 - http://www.americantorque.com/page/0/2437/ ) resided in ~ Well it seemed that the timing was right cause the season of Spring was now upon us and the greenery from the trees and the singing of the birds put a better light on this wonderful little island that was about to become ours ~

The home was finally built and completed and my friend John would tell us that when we moved into our new home he was going to have the music from "Ravel's Balero" playing loud and clear in the neighborhood as we were moving into our home and he was true to his word ~ I had arrived with a rented truck full of furniture that we had moved from our Sunnyside apartment with the help of my Dad and Brother Vito, along with two co-worker friends Joe Camp and (can't now think of his name) ~

Over the years John and his family would become very close with our family and we would go on many vacations together including but not limited to Expo 67 in Canada but that's another whole story ~ Just one more thought that I need to mention is that with John's pioneering to Staten Island many other co-workers would follow in his foot steps that were with such names as Ray Celano, (Chapter 13 - http://www.americantorque.com/page/0/2491/ ) Stan Feinberg, Joe Campagnola, (Chapter 2 - http://www.americantorque.com/page/0/2413/ ) and Paul Kaufmann and Ed Purfield too ~

Max Wilde I imagine that a lot of folks have stories of dates on the ferry. My first date ever was my first ride ever on the ferry on Easter Sunday 1965. It cost $.25 in those days. I lived in Jersey City and we had to ride a bus to the PATH and then walk across town to get to the boat. As I recall, it was a beautiful, if a bit chilly, day. We were dressed to the nines in our Easter finery. The boys in suits and ties and we girls in our dresses, hats and gloves. It's a nice memory.

~ Amazing Lee Delgado as just this morning I was planning to take a photo of you, Liz and Mike with my new Camera when the three of us took a ride up to Connecticut with my new '57 Plymouth but was unable to do so as I still am learning how to use it ~ I was going to take a photo of a picture in my first Photo album that I have and was planing on putting that photo in this Chapter/link ~ http://www.americantorque.com/page/0/3643/

From Lee Delgado ~ Grt. Post the pic; I have no recollection of that trip. btw That chapter was fascinating.

At Canon U.S.A., Inc. customer service is our number-one priority. We take great pride in providing you with the best service possible and strive to make your Canon ownership experience enjoyable.

Please take a few minutes to complete a brief online survey and tell us about your experience when you phoned our Technical Support Center on 01/31/2017 regarding your Canon product.

To access the survey, click on the link below or copy and paste the address into your browser.

Thank you for your feedback and for being a valued Canon customer.