1973 Pontiac Grand Am 400ci 4sp 4bbl dual exhausts. First Year Grand Am. All original low mileage. 1 of only 180 made in this configuration. A total of 43,136 Grand Ams were built during the first year of production.

1973 In family since new. Purchased new by father of John's wife. 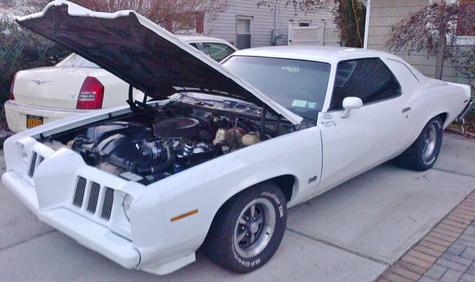 The Pontiac Grand Am was a cross between a Grand Prix and a Trans Am. It was considered a Luxury Sport. Designed to compete directly with Mercedes and BMW's incursion into the US market. 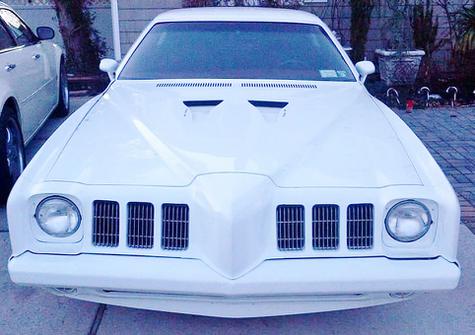 The 1973 Pontiac Grand Am style had a unique flexible urethane front fascia center nose (known as the 'Endura' nose) that was squeezable and could return to its original shape following a minor collision along with the new 5 mph energy-absorbing bumpers. 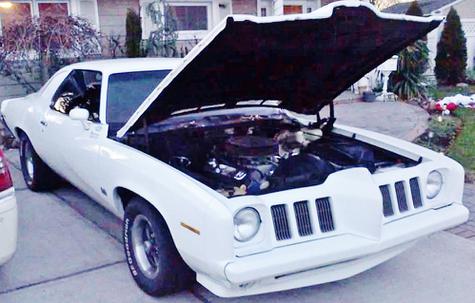 Pontiac also celebrated Nascar's 25th Anniversary in 1973 and introduced the Grand Am Silver Anniversary car. See the pictures below. 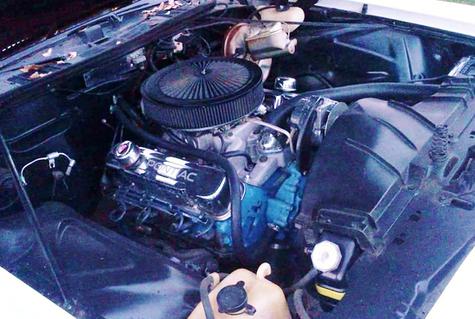 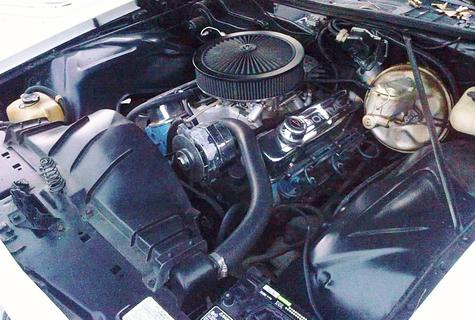 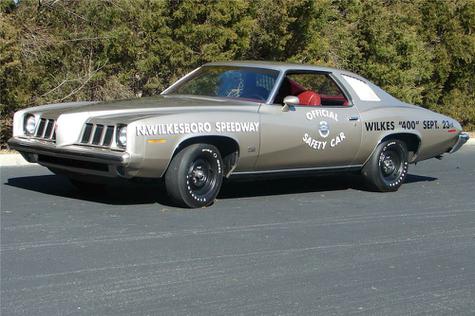 One of nine special silver Grand Am's built especially for and delivered to Nascar for Nascar's 25th Silver Anniversary. 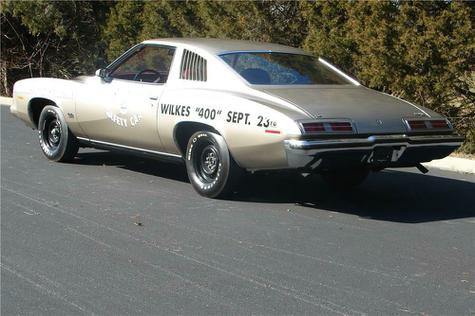 These Pontiacs were taken track to track and used as pace cars in many Nascar races in 1973. 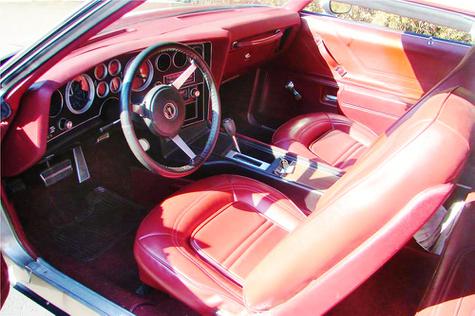 The Nascar Grand Ams had an automatic transmission. John's car is a 4sp very rare. 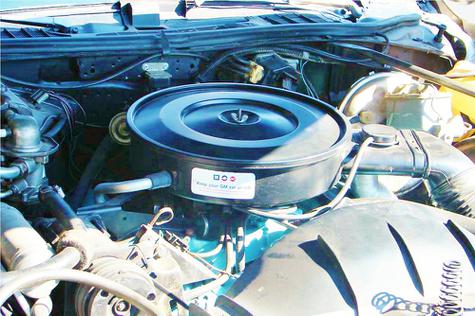 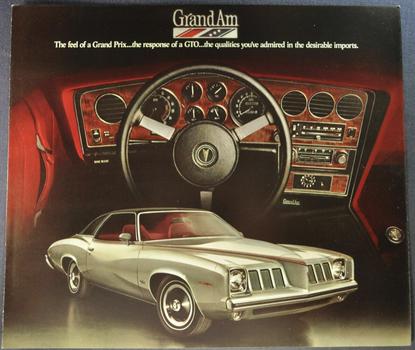 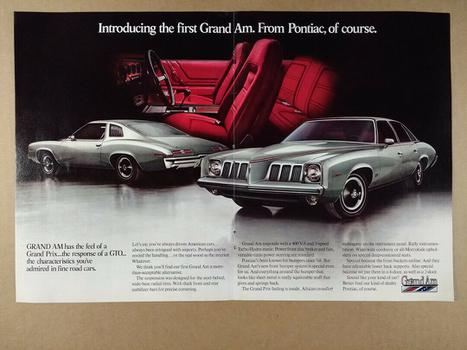 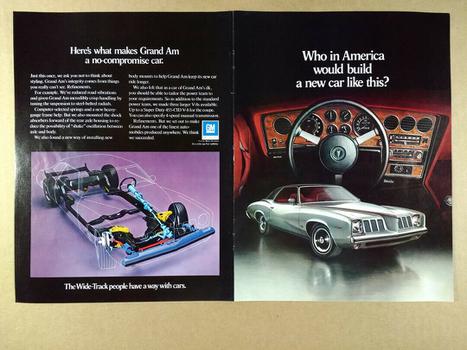 Very unique and distinct First year 1973 Pontiac Grand Am 400 V8 with Hurst 4 sp. All original out of factory. Been in the family since new only 180 made of this configuration. Belongs to my brother John.

Pontiac was the only company in that era that was still making classy cars with a performance image. Most car companies had given up by 1973. Between smog, safety and gas crunch, the performance image thing was a very bad word. Pontiac with this car and the Trans Am still had some excitement going on. Cheers.

I always had a special love for Pontiacs. My first car a 1959 Catalina convertible 389ci was a dream. I later had a 1984 Pontiac Grand Prix which was luxury and sport at the same time. I always loved and had a desire for a GTO, what a car that was. A very sad day when GM shut down Pontiac. That's why I love going to the car shows it's a piece of Heaven to me.

When I saw this I thought it was the CAN-AM Pontiac.

I just watched a video on you tube about the 1977 Can-Ams and how when the mold for the rear spoiler broke, they decided the Can Am was done. And a lot of cars that were destined for Can Am modifications were sent to dealers as just regular white LeMans.

Look at that dash! That is all business with gauges and air vents. I had a 1978 Grand Am and the dash really set it off. It was trimmed in aluminum.

Pontiac sure tried to keep the performance car market going with their 400 CI engines.

Its too bad to see the sad ending of Pontiac as I watched the last Pontiac roll off the assembly line. I sent the video to my uncle who was a Pontiac mechanic tried and true.

Just as i see MOPAR or FCA killing off their SRT Group now.....sending their engineers to the other companies under the family umbrella now.

All I can do is sit here and reach up and keep pulling my eyes down from rolling up in my head when I hear of IMPROVEMENTS that sure resembles sabotage to me.

If you like what you own, you'd better drive it and enjoy it. Those electric cars are coming.......

WILL we see CASH FOR CLASSICS? Very little cash that is.

Rob any way you can post that video of the last Pontiac rolling off the line? Does your Uncle have any pictures you can share on Pontiacs. Sounds like a very good post you can make on American Torque dedicated to the memory of Pontiacs. Future generations can see this as part of automotive history.

I agree that we should drive what we own and enjoy them now. Great seeing these cars at the shows driving in and out. Hope we have some car shows this summer.

Do you have any pix of your 1978 Grand Am you can share with us, you know how much we love pictures! I believe you had a 2nd generation Gran Am. Best Regards, Mario

Awesome video Rob. I copied it on my computer. Sad to see how great the Pontiacs really were and got the ax due to GM's wasting away money leading to bankruptcy.

NO PIX of the 1978 Grand Am....wife won it in the divorce settlement and she kept all the family album photos. It was the Chocolate Brown with Gold Trim and Saddle interior and Landau top.

It was a real looker.....Ralley Wheels, White Letters, the cat's pajamas and don't ask me what THAT means.

I have no photos of ANY of my early cars They are like what Barbra Streisand sings:

Oh well at least I still have my memory....she couldn't take that away.

Thank God for our memories! Your Grand Am sounds really nice. You pictured it very well and I can see it in my mind.

What your ex did in keeping all those pics was wrong. You are the better person I can tell.

But think of all the cars, pictures and new memories you've attained since then! You're the "cats pajamas" and I'm not sure what that means either, but I'm sure it's a good thing!

Mario, My Uncle is as old as Methuselah....I had to send the video to his son so he can show it to him.

I was told my uncle and aunt wanted to adopt me since my Mom didn't really want me. I think I could have learned so much from my uncle working on everything that needed a skill level.

Sadly my Mom said no so I was left to figure life out on my own. I didn't do bad with what I was given so no sour grapes here. It just took a lot longer and it was harder to get to where I am today with cars.

I have been blessed with many things and people in my life so I look at them for happiness, not the ones who said they cared but their actions didn't match their words.

Rob you've done fantastically well on your own. Sometimes family are not your best friends, and sometimes friends are like family. I've learned that too.

You have a great sense of humor and that separates us from all other living creatures.

Ever see a dog or a cat laugh? Or a fish or a horse tell a joke? I haven't.

Your posts on this website are colorful, knowledgeable and entertaining, keep it up! Best Regards, Mario

I find that there are a lot of really wonderful people in our great vintage car hobby. Folks like Rob and Mario are very abundant amongst old car hobbyists. I can honestly say that ALL my buddy's are old car guys. For the last 40 years or more, all my friends I have met through the hobby. There is something about old cars that brings out the best in people. Cheers.

I agree George and you are also one of those "old car guys" that is a good friend. Our love of classic cars keeps us going and together we have so much shareable knowledge to offer. Cheers!