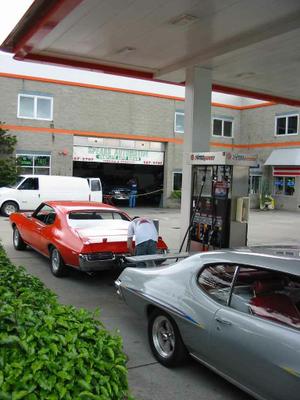 The three of us that drove our GTOs to Tiger Run 2004 had quite a long, strange trip.

It started with Reed Racing's new tires not fitting correctly...a trip to the tire store with the wheels and a tire change solved that. 2 hour delay.

Next was my turn. South of Olympia, my alternator mounting bolt snapped again while seeing how things felt at 85 mph. They felt fine until I heard the loud kapow sound and then a nerve wracking metal on metal sound as the bolt bites and chews the fan blades. A trip to Ace hardware back in Olympia to buy some makeshift parts then another trip to Schucks for bolts then using a borrowed drill in the parking lot, an easy out kit and some other things got us back on the road. Another 2 hour delay. 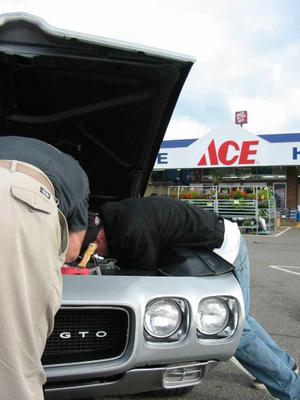 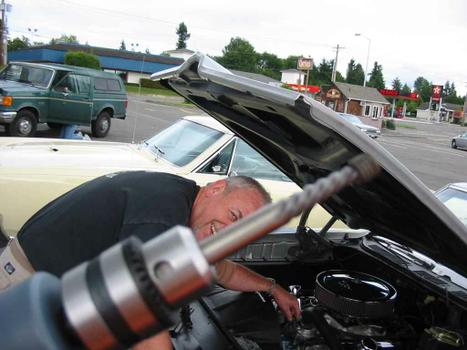 Fun with the easy out kit

Now it's Royal Botkin's turn. Near Gresham, Oregon, The Royal B reports that he's losing brake pedal pressure and wonders how he's gonna stop the beast. As he pulls into a gas station, the car is smoking like a sumbitch, well, because the car is on fire ...OOPs. Bob promptly puts it out with a fire extinguisher but it looks like we're dead in the water with no brake lines. Why? Brake line too close to header caused chafing and pinhole and...this problem. Several calls to Oregon Goatherders later we learn about a 24 hour auto parts place not far away. We also meet a tough looking tatooed young man who turns out to be a mechanic with MacGyver-like approaches to solving vehicle problems. At about 1 am, the new brake line is in, the brakes are bled, they work!! 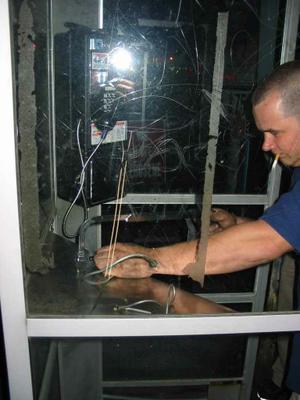 All along, we have miraculously avoided rainfall. We decide to proceed to Bend, over Mount Hood we go. It starts to rain. Bob calls me on his cellphone requesting that I take the lead because my headlights are poorly aligned/aimed and the beam is bugging the crap outta him in his mirrors. Sorry Bob, I'll take the lead. At this point my eyelids are way heavy and I can't tell dry pavement from wet, 50 MPH is too fast at times, poor visibility and it's raining. The rain disappears and I increase speed to between 60 and 70 mph, humming along and I can see WTF is out ahead of me :)

By now it's about 3 a.m. but I don't see the guys behind me anymore. Crap! I arrive at Madras and try to call the boys with no luck. I notice a msg. on my cellphone and it's Royal Botkin with some sort of problem and he's outta commish near Warm Springs Oregon, approx. 40 miles north of Madras. I call again, no answer. I pull over for Gas and order up a coffee at a truck stop along with a quick snack. Call again, no answer. I ask the dude running the truck stop to let the '66 and '69 GTOs know, if they swing by, that the guy in the silver '70 has proceeded to Bend due to extreme sleepiness. I fish around the trunk looking for the info on the hotel, when I hear a couple of good sounding engines coming toward me. By now it's about 4 a.m. and I'll be doggone, Reed Racing and Royal B. are blazing thru Madras at about 50 MPH on the main boulevard. They don't see me but I jump in, fire it up and punch to catch up to my companions.

We check into the Bend Riverside at about 4:50 am. Long day, Long night. Show me a bed, this gavel banger's beat !

My alternator broke again right after the car show on Saturday. Crap ! Not again. This time at the suggestion of Karl Boe, we re-rig the system with stout pipe, unithread cut to the right length and it seems to work but I missed everything but the last 10 minutes of the award banquet. Oh well !

So, like I mentioned, it was a long, strange trip

About the time I caught on fire I would have gone home. More gut's that I got!

Sounds like one of our car buying trips to Pomona